Here continues the chronicle of my time at Brasenose College in Oxford, England. I plan to write one blog post a day until I have exhausted the moderately interesting memories of the trip which I am at liberty to share with the public at large.

In this blogpost, I shall attempt to amuse you with my humor, regale you with my tales, appall you with my excessive abuse of parentheses, and astound you with my short attention span which may, occasionally, cause me to lose interest in whatever I am currently typi

On Sunday night I set the alarm clock on my cell phone to go off at 7:00 a.m. on Monday morning. I hoped that I would sleep well after the through-the-night flight and the six-hour timezone change. I did sleep fine, my cell phone alarm worked, and I got up to go take a shower in the Advanced Shower on the third floor (in Staircase V [5, Five, Cinco]) where I lived. I say Advanced Shower because that's what the shower said.

It was a very nice shower, and it didn't take me long to learn how to use it. The showerhead was detachable (or, at least, it came off when I tugged on it...) and the water was nice and warm. The shower was to become a source of great joy for me in the coming days, for I used it whenever I wanted to take a shower.

Refreshed and excited, I trooped down the stairs of Staircase V (5, Five, Cinco) and walked over to Brasenose Hall, where I had eaten dinner the night before. I didn't go this time for dinner, but rather to break my fast, partaking in a ritual commonly known as breakfast*.

*Breakfast was to become a source of great joy for me in the coming days, for I partook of it whenever I wanted to break my fast.
Breakfast the first morning was a cooked breakfast (served by the excellent Brasenose College staff) that consisted of: two sausages (or bacon), scrambled eggs, baked beans (a novelty to an American, but actually quite brilliant, wot wot!), and croissants (with chocolate in them*) and without chocolate in them, Mr. Juicy juiceboxes (similar to their Juicy Juice cousins across the pond--pineapple was my favorite*).

*The croissants with chocolate in them, and the Mr. Juicy pineapple juicboxes were to become a source of great joy to me in the coming days, for I partook of them every single breaking-of-my-fast without fail.

Cereal was also available (Frosties were my favorite--the box bears a remarkable resemblance to Frosted Flakes. They're more than good, they're English!), and I ate cereal in addition to the cooked breakfast, and I finished off this well-balanced breakfast* with a banana.

*Claims of a well-balanced breakfast are unverified.

After breakfast, I worked on my paper and checked my e-mail (probably--it's all a little fuzzy because breakfast was so very...all-consuming) and then later in the afternoon I visited Christ Church College!

Steven Visits Christ Church College After Breakfast
Christ Church College is known for its connections to Lewis Carroll's Alice in Wonderland, and, more recently, for Harry Potter. Scenes from the first two movies were shot there--notably, the staircase leading to the Great Hall and the Great Hall. I found out that some friends were going, so I didn't have time to dress up as Harry Potter*, but I grabbed my camera, paid £6 to get in, and joined the chorus of WOW and OMG from my group. 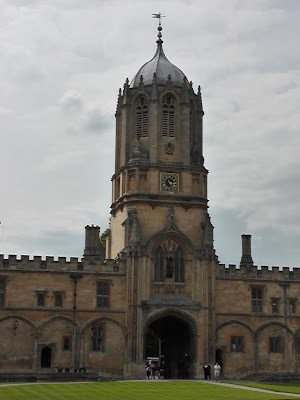 Then I took photos of this most wonderful place. 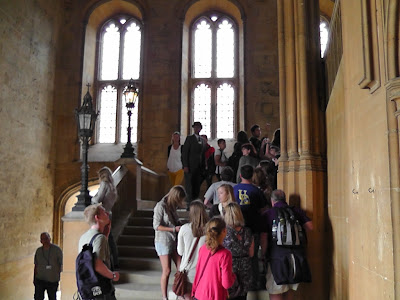 Daniel Radcliffe and Emma Watson and Rupert Grint and Tom Felton and Matthew Dave Lewis were all there! 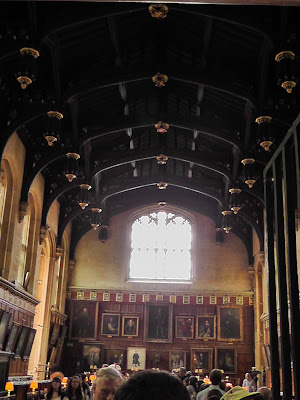 A very Great Hall, to be sure.

Steven Eats Dinner and Walks Around
After Christ Church, I worked some more on my King Lear paper, which was due on Wednesday, and then I went to dinner. Dinner was most excellent.

After dinner, some friends and I walked around Oxford and I took them over to the outside of Christ Church*.

*Christ Church was, of course, to be a source of great joy to me in the coming days.

I found the way. 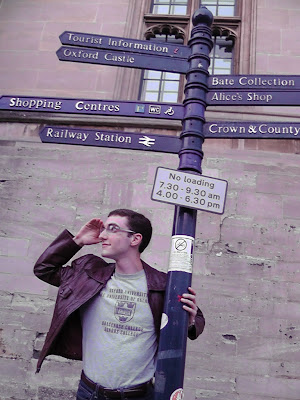 Then we found a door. 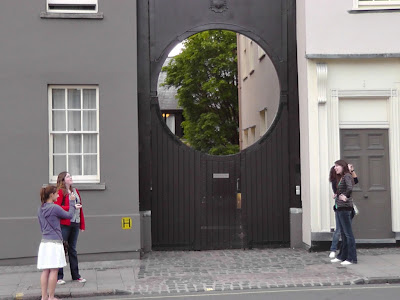 Thus ended the Second Day, the Day of the Moon, El Día Segundo, Dos, the II, the Son of.

Editor's Note:In an attempt to confuse readers, I didn't link to the two previous blog posts that I made about Oxford, including the "Day 1" post which is cleverly entitled: "A Fellow at Oxford (but not an Oxford Fellow)"

So this is actually my third Oxford post, but I'm going back in chronological order--so it's kind of like the Star Wars prequels in that it's kind of confusing, and you already know some of what's happening--but there's no Natalie Portman and no Jar Jar Binks.

Make of that what you will. 8D
Posted by SteventheThorn at 5:52 PM