I've been rereading Terry Pratchett's series with Tiffany Aching (witch-in-training) and the Nac Mac Feegle (or "Wee Free Men" or "six-inch tall blue highlanders"), so this past weekend I finished Wintersmith for the second time. 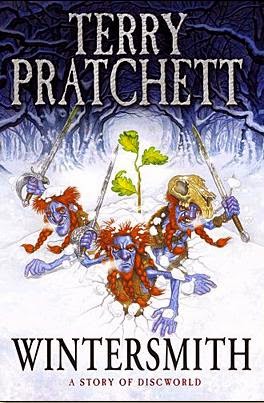 Tiffany Aching gets more than she bargained for when she disobeys the rules and joins in a dance of the seasons. The Wintersmith, spirit of winter, confuses her for Spring and falls in love with her. The only problem is that the Wintersmith isn't a man, and he's trying to woo her with Tiffany-shaped snowflakes and Tiffany-shaped icebergs, and he's bringing on the worst winter ever to impress Tiffany with his strength.
That's actually not the only problem. But that's the biggest.


This book was even better the second time around.
Posted by SteventheThorn at 4:30 PM No comments: