This morning a bunch of friends and I went to Christ Church (first time for them but second time for me) and I, of course, was dressed up like Harry Potter because we were going to see the movie at 15:15 (3:15p.m.). So this morning I woke up, got dressed as Harry Potter, went to breakfast, the English smiled at my attire, my friends though it was cool, and then we went to Christ Church.

I took lots of pictures, and my friends took even more. It was super-cool to be dressed up like HP (a friend gave me some eyeshadow-eyeliner-whatever-you-call-it for me to draw a scar) at the place where they filmed Sorcerer's Stone and Chamber of Secrets. 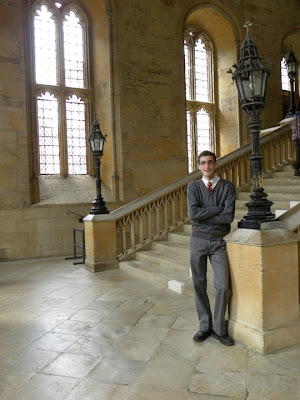 I definitely felt like Harry Potter at Hogwarts though--not just because of the attire, but because people would point and stare at the scar, just like in the books. Sometimes cool, sometimes weird. Overall, a great experience, especially the pictures with the kids.

Then we came back home for lunch (fish and chips! Score!), which is the last time until Sunday night that we can eat at Brasenose Hall. Apparently all colleges have this conspiracy where Friday dinner-Sunday lunch must be eaten off-campus. After lunch, I read Othello (my next play, which is interesting, but also very dirty content like Romeo and Juliet, Hamlet, Measure for Measure, etc.) I'm also reading a book for Professional Writing, Striking Distance, which is also very sexually graphic. It's very irritating, and a little depressing, because I don't find that entertaining at all. It reminds me of freshman year, when we saw really famous movies in Spanish class that had extremely graphic sexual and violent content. We're adults, so it's supposed to be "okay," but it's really the kind of entertainment that adults should know better than to watch.

Oh, well. I spent some interim-preparation time to get myself ready for proper entertainment, Harry Potter at 3:15p.m., by listening to A Little's Enough by Angels & Airwaves.

Then we got together and walked to the cinema. The British have a one-up on us when it comes to cinema: assigned seats! It's brilliant. You don't have anything to tear off from your ticket though, they just...tear your ticket. Eh?

Trailers for Dark Knight Rises and The Rise of the Planet of the Apes showed before the movie, and I wanted to Rise from my seat and shoot a spell at some Spanish people who were talking during the movie. Really annoying.
I also saw a Premier League trailer, and got a little teary-eyed. One of the Birmingham fans in the trailer also got teary-eyed. My friends didn't get it. Not everyone does.

Then Harry Potter, and wow.

For dinner, we ate at a Thai place. It was a "nice dinner," so it was around £10. Dollar's just not as good as the pound. Chicken Pad Thai and Thai Iced Tea. They had sticky rice served in a kind of pot inside a kind of pot. The waiter thought it was funny that one friend didn't really know what to do with it, because it was one big sticky ball of rice. She figured it out.

Then it's early bedtime...
Posted by SteventheThorn at 2:45 PM