The Fifth Elephant by Terry Pratchett

After going out of reading order, I finally read The Fifth Elephant by Terry Pratchett.

Like Jingo and Monstrous Regiment, The Fifth Elephant is Discworld story involving political intrigue and the looming threat of war. Lord Vetinari, Carrot, Angua, and - of course - Sam Vimes will have to save the day. 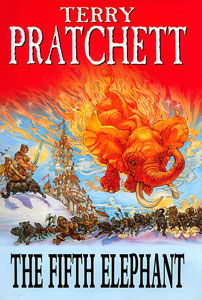 Vimes is sent as an ambassador to Überwald, a realm of dwarves, vampires, werewolves, and Igors*. Vimes's official job is to negotiate favorable trade terms for fat**. Vimes tells his wife that this political outing will be a vacation. However, Vimes's real mission is to have a firsthand look at the tenuous political situation involving the crowning of the new Low King of the Dwarves.

*Igors are humpbacked humanoids made from the sewn-together parts of those who have shed their earthly bonds. They tend to find employment with vampires, werewolves, and mad scientists. Igors make great doctors and medics, as they have no difficulty restoring a severed hand to an arm (provided you can find it, of course) and have an excellent working knowledge of the human body. Bodies can go far if you take care of 'em and use 'em right. "Waste not, want not," as the Igors say.

**When the Fifth Elephant*** fell from the sky and crashed into the young Discworld, it burrowed deep into the ground and left huge deposits of fat and other precious materials. Fat is a huge part of Überwald's economy.

***Everyone knows that there were supposed to be five elephants on the back of the Great Turtle A'Tuin.


Standing in Vimes's way (or standing behind him in the dark with a knife) are mysterious figures who oppose the new Low King. The Scone of Stone, the great symbol of the dwarfish monarchy, has been stolen, and the Low King cannot be crowned without the Scone. The Scone isn't the only thing that's gone missing. An Ankh-Morpork citizen has been murdered, posts are deserted and soldiers killed, and some of Vimes's own men go missing. Then Vimes himself is targeted...and the treacherous dwarves, vampires, and werewolves of Überwald do not play by Ankh-Morpork rules.

Here, there is no law.

Meanwhile, this political trip is a homecoming for Angua, the City Watch werewolf, whose parents are nobility in Überwald. It also might be a reunion with a former boyfriend, making things awkward for Captain Carrot - who, as usual, will have no problem getting along with everyone. No problem at all.

Meanwhile-while, Sergeant Colon is left in charge of the Watch while Vimes and Carrot are away. Let's hope the power doesn't go to his head. And the entire Watch doesn't go on strike.

The Fifth Elephant was an entertaining read. I give it a 6/10.
Posted by SteventheThorn at 3:48 PM No comments: