Day 6 (Seis, VI, the Sixth) at Oxford was Harry Potter Day. July 15 was the glorious day that Harry Potter and the Deathly Hallows Part II opened and shattered all previous opening-weekend records--and deservedly so! 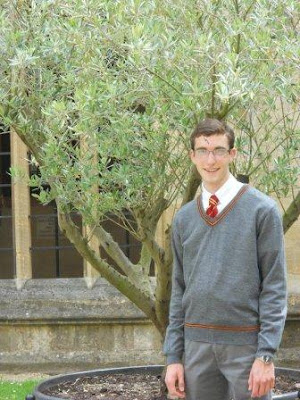 Harry Potter was awesome and so was my photoshoot at Christ Church.

It was an awesome movie. We watched it at the Odeon Cinema (since theaters are called cinemas in England and theatres are where you watch plays) on George Street (which is not too far from a Games Workshop store!) in the afternoon. The cool thing about cinemas in England is that you buy your ticket and get a specific seat, so you don't have to worry about...picking a seat. That's great if you get there in time, but I imagine that it would be annoying if you were trying to get there late with a group. I thought it was cool. (That's because I will have order!)

We were a bit confused about who was supposed to take our ticket though, so as we were walking into the cinema-doorway-that-led-to-the-cinema-screen-places, a girl at the concession stand commanded us to halt and told us that we-shall-not-pass.

Then she destroyed the bridge and fell down because the Balrog cracked his whip.
She will come back, dressed all in White. At the turn of the tide.
For a wedding.

But before all of that happened, she checked our ticket. Actually, she tore it. There was no stub to tear--she just tore the ticket. Then the Balrog, etc. etc.

After that inspiring scene, we found our seats and some of us were disappointed that the screen was little bigger than the HD Televisions in Cate Center at OU (a gross exaggeration! They that said such things ought to be ashamed for sure. Naughty naughty.)

There was a commercial for the English Premier League before the movie started. I got teary-eyed (as did a Birmingham fan in the commercial). Jamie didn't get it. That's okay.
We do, my friends. We do.

The movie was 100%, 10/10, outstanding, fantastic, wonderful, phenomenal, end-of-the-world-spectacular. I think I cried four times. But that's okay, because It All End(ed). 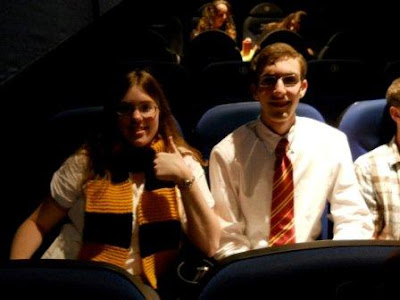 We were here to see my home video, Harry Potter and the Deathly Hallows Part II, and it was awesome.

My only complaint is that there were Spanish people (who sounded French) that talked during the movie. Unfortunately, He-Who-Must-Not-Be-Named had the Elder Wand--because if I did, those Spanish-speakers would have been Petrificus-Totalus'd, Stupefy'd, and Reducto'd into oblivion.

After the movie, we went to a Thai place called Bangkok Place for dinner. It was a "nice dinner," so it was around £10 ($15-17ish). The dollar's just not as good as the pound.

I had Chicken Pad Thai and Thai Iced Tea. Sarah ordered sticky rice, and it came in a pot inside of a pot. She didn't quite know what to do with it. Nobody else did. Andrew did, however, know that he needed to order sticky rice with his Sweet and Sour Chicken, but he didn't. He's that resolutely awesome. He stares not-sticky-rice-Sweet-and-Sour-Chicken in the eye.

Michael J. Fox goes back in time, and we went to Christ Church to start out the day. I had to write this post out of chronological order because I did a Harry Potter post the day after all of this happened and I had to distinguish this one from that one and make this one better!

So I went to Christ Church for the second time in one week, dressed up as Harry Potter this time (with an eyeshadow scar courtesy of Sarah's eyeshadow). All of us took our cameras, but I was to make use of Shaina's photographic skills because her camera is better for still photos. 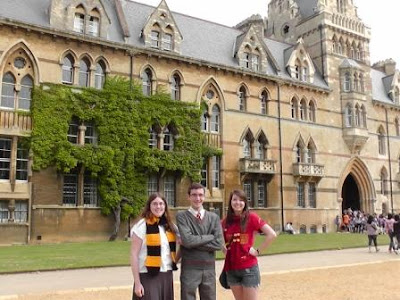 Aubrey the Hufflepuff with badgers on her shoes, Harry Potter, and Kayley the Fashionable Gryiffindor

It was a morning-long photo shoot. As Shaina said, "If this is going to be your Mecca, we'll make it a good day." 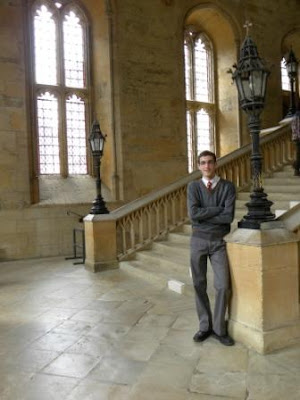 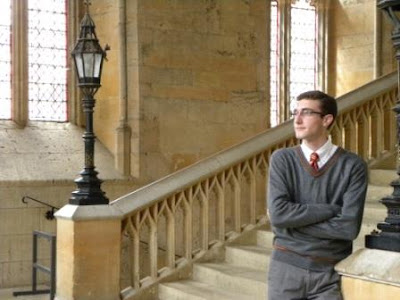 Christ Church College is, of course, the place where scenes from The Sorcerer's Stone and The Chamber of Secrets were filmed. Namely, the Great Hall and the staircase leading to the Great Hall.

Then other people, kids and teenagers, started asking us to take pictures with them. Some French kids asked me if they could have their picture taken with me, some Asian teenagers did the same inside the Christ Church Cathedral--it was really cool. I was like a Disneyworld mascot or a celebrity. That was a lot of fun. It wasn't as fun to have people point at me and whisper "It's Harry Potter!" It was just like reading The Chamber of Secrets or The Goblet of Fire where people are whispering about Harry. That was a little creepy. Celebrity can be weird.
Daniel Radcliffe can have it--and I imagine it must get really annoying at times, but when the kids are there it's really, really cool. 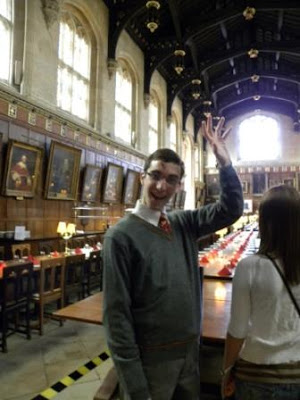 Take a picture of me with the ceiling in the background! 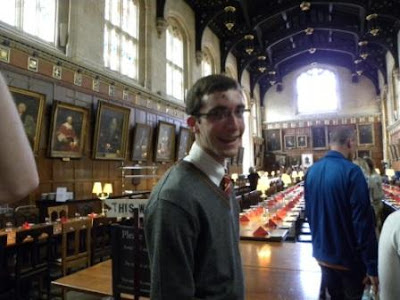 You took a picture of me asking you to take a picture, didn't you.

We came back home for lunch and had fish and chips, which is great, because we were planning on having that on Friday night (which wasn't great in that we had to change our plans but was great because now we didn't have to pay for fish and chips), so instead we went to Bangkok Place for dinner, but you already know that because this post was out of chronological order! 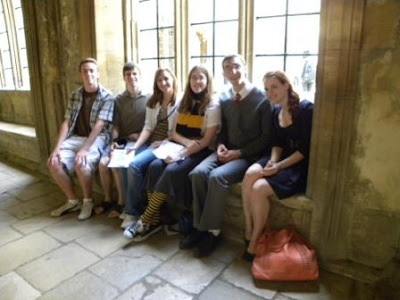 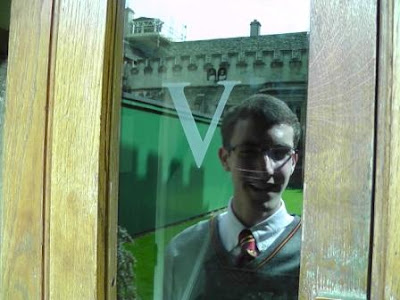 Harry Potter's nickname is "V for Victory!"
Posted by SteventheThorn at 8:06 PM