If you want an action-packed steampunk young adult novel, I highly recommend Leviathan by Scott Westerfeld. 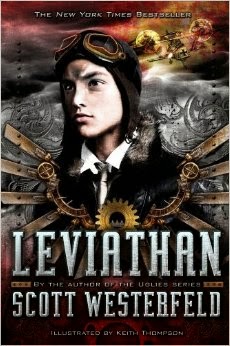 Steampunk is a science fiction subgenre that combines the past with the future. This was my first venture into steampunk, and it certainly will not be my last. I plan to buy the next book in the Leviathan series today.

Mechwarriors vs. Genetically-engineered beasties in alternate World War I.
Prince Aleksander is the son of the Archduke Franz Ferdinand. He's on the run from the people who assassinated his father.
Deryn Sharp is a girl who's disguised herself as a boy to join the British military. She's trying to prove herself and stay undetected. And survive the terrifying disaster that will cross her path with Aleksander's.

Leviathan also has stunning illustrations in each chapter, even in the Kindle Edition.

You can check out some of the illustrations on Scott Westerfeld's site.

You can also see art on the website of Keith Thompson, the artist.
Posted by SteventheThorn at 12:25 PM No comments:

Josh and Benji decide what video to make.

A great video by two of my amigos.
Posted by SteventheThorn at 11:09 AM No comments: