Wednesday, Wed-Nes-Day, the Day of Woden, July 13, began with a cooked breakfast because I took great care to set three alarms on my cell phone—after fully charging it. I was Susie-on-top-of-it (I heard that phrase once in a Foxtrot cartoon [by Bill Amend], and I just did a quick Google search to make sure that it didn’t mean anything that I didn’t want it to mean—although it’s odd that I would use a feminine phrase like though—although it’s not so odd when you consider that I was doing a Shakespeare course in Oxford…you know what I mean, don’t you, Viola?)

After that ridiculously long parenthetical comment, I feel like I need to start over. Maybe with a large, bold title and a photograph provided by the excellent Kayley, who takes excellent photographs.

I now realize that I neglected to mention the potatoes in my previous descriptions of cooked breakfast. Fear not, potatoes—I shall not neglect thee any longer.

After the excellent cooked breakfast, I believe* that I spent my time writing poetry and being dramatic with words on my words processor. It was enjoyable. I also proofread my King Lear essay (which I intend to post here on my blog—unless I forget) because my tutorial with my excellent tutor, Ben, was at 3p.m. that day. Aubrey, of course, was to accompany me to the tutorial (Aubrey who saved the day on Tuesday).
I have yet to mention lunches at Brasenose. That’s not because they were unmentionable, but because the awesomeness of breakfast and dinner often overshadowed lunch—which was served cafeteria style in the cafeteria-style room in the kitchen that occupied the grass in Old Quad.
Lunch was almost always good, but sometimes it was confusing. By “confusing,” I mean, sometimes the American called the chicken fish and the fish “wat”? But it was good. The only times it wasn’t good was when it wasn’t being served, which was on Saturdays and Sundays. On those days, I had to fend for myself, or I was in Nottingham.

A Quick Detour in Thought: Memorable and American

I must now make a Quick Detour in Thought, because I just remembered that I had forgotten to describe the dinner on Tuesday night, which was most memorable and most American. To capture the full essence of this meal served by the wonderful Brasenose staff, I shall share an excerpt from an electronic message that I sent to my brother after this most memorable and most American dinner:
Tonight for our dinner, they tried to mak us Americans feel at home! They know that Americans like Mexican, right? And we like Italian, right? And we like French Fries--er, Chips, right???
SO THEY GAVE US ALL OF THEM AT ONCE!
It started out innocently enough, with the usual bread rolls and water. But then it began:
-Tortilla chips with guacamole and spinach as an appetizer
-Curly French Fries (in a platter for the table, in place of our usual vegetables)
-Lasagna with Garlic Bread
-Corn on the Cob
Then we had ice cream and brownies for dessert.

Back to Ben and Ben’s

I think I also forgot to mention that some of us went to Ben’s cookies, a cookie place in Covered Market, on Tuesday. Ben’s cookies are delicious and deliciously large. Aubrey and I bought a tin (little round tin cookie-holder thing) of these cookies and then saved some for later. After our tutorial with Ben (who does not own the cookieshop, unfortunately), we ate the cookies that were saved for later.
And it was good.
Ben teaches at Exeter College, which is where Tolkien attended in 1911. Exeter College is just across from Brasenose (you just have to cross Brasenose Lane and climb a wall, which would be illegal—the wall-climbing, not the Lane-crossing) and down the lane, and also across from Jesus College (but on a different side).
People like to befriend people from Jesus College, so they can say, “I have a friend in Jesus.”
Aubrey and I went up the stairs (one staircase of the many stairs we could have taken) to Ben’s room, and then we sat down and Aubrey read her King Lear paper out loud. After she read her paper, all three of us talked about the paper and the play at large. Ben asked me if Aubrey made points similar to the points that I made in my own essay. Ben asked us questions about the play, probing our minds and making us think. Then we read some parts of the play to better understand it.
The tutorial was a great experience. Ben is smart, he’s a great teacher, and he leads interesting conversation about the play. This tutorial experience is more or less how teaching has been at Oxford for hundreds of years. It was great to partake in that. And we had two more to go!
Then enter more cookies, as I said before. We also went shopping at Boswell’s (not to be confused with Blackwell’s), which is a department store that is magical, because it looks small like the tent in Harry Potter and the Goblet of Fire but it keeps on going forever and ever up and down and inside and out through multiple entrances.

And we found R2D2 in the toy section (which was my favorite part of the store). 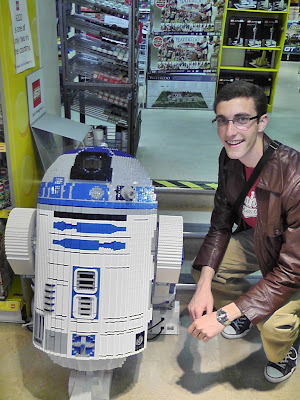 Who is that shockingly handsome guy? More importantly—who’s the guy in the leather jacket crouching next to him?

Then I found a phonebooth. We have many of these at OU. They have more at Oxford. 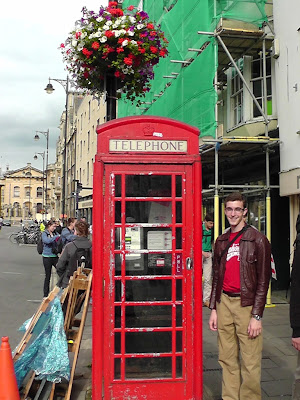 I took a picture in front of my staircase (Five, V, Cinco), because “V” is my nickname. See the top of the blog? “V FOR VICTORY” 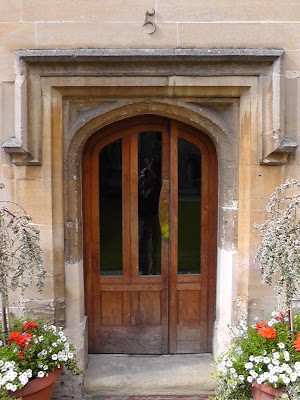 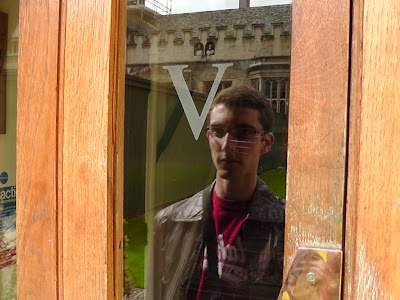 I found Pat and Caleb playing croquet on the sacred-grass-upon-which-you-must-not-trod-unless-to-play-croquet-or-bocce. 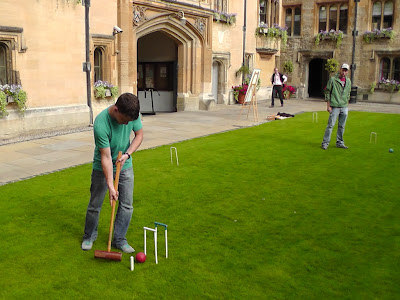 Win.
Then we had another wonderful dinner at Brasenose Hall.
Posted by SteventheThorn at 5:28 PM