Apologies for not updating my blog yesterday. I was occupied with learning Marc Antony’s funeral oration from Shakespeare’s Julius Caesar. I was also playing Connect Four. It was important.

Oxford Day 3 (III, Tres, the Third) Has a Poor Start

Tuesday, July 12, began with a poor start. Perhaps it would be more concise to say that “it started poorly,” since “began” and “start” in the same sentence might be excessive.

The fire alarm began because someone in the kitchen burned toast, but my day would not have begun with that fire alarm if my cell phone alarm had gone off two hours earlier.

I jumped out of bed to the screaming sound of the siren, my heart racing. I grabbed my key, locked my door with clumsy hands, and then ran down the stairs in bare feet and my University of Oklahoma pajamas.

At the precise moment that the fire alarm had gone off, one of the girls from another university, who lived downstairs, had plugged something into an outlet. She thought she was the one to set the fire alarm off. She was quite distressed.

I ran over to the lodge (the appointed emergency meeting place), where a few amused classmates complimented my OU pajamas, looking entirely unconcerned about the fire alarm. I think the pajamas gave Dr. Wright a laugh too.

About that time, I realized that there was no danger, so I returned to my room. I later found out about the burned toast. I had neither burned toast nor cooked breakfast that day, because I had slept in past breakfast.

If only the toast had been burned an hour before. Then I would have had cooked breakfast—and in my OU pajamas too.

I Meet a Grumpy Old Bugger

Since I missed breakfast at Brasenose, I had to go somewhere else to eat breakfast. I was very discouraged about how the day was developing, because I meant to finish my King Lear paper that morning, and I was supposed to pick up my packed lunch at breakfast.

Now I have a lot of things to explain all at once.

There were four classes in the Honors at Oxford program: Shakespeare, Contemporary English literature, and two archaeology classes. The Shakespeare and English classes were six hour classes, so we met for three weeks at OU in June. The archaeology classes were three hour classes, so they only met in Oxford and had a lot more work to do in Oxford. We did a lot of our work back at OU, so the only work in Oxford was three papers and three one-hour tutorials once a week.
Savvy?

Aubrey and I were going to tag along with one of the archaeology classes to see the Chalkhorse at Uffington, which is a horse made of chalk. At Uffington. Now we’re all caught up. Back to the Grumpy Old Bugger.

I went to Blackwell’s, a very famous bookstore in Oxford, to eat breakfast. There are less expensive places to go for breakfast, but I only knew of the café in Blackwell’s, so I stuck to what I knew, and I ventured off to break my fast.

I found a blueberry muffin—which I wasn’t supposed to touch before I bought (not that I did, mind you), and a glass bottle o’ orange juice. Apparently, I was supposed to order the orange juice with a cup and ice, because the lady at the counter gave me a funny look when I said “no thank you” to the cup and the ice.

In reality, I wouldn’t have minded a cup and ice, but I panicked because of the choices set before me. It was early, it was morning, it was breakfast, I had just recovered from a fire alarm—please, don’t give me options! The blueberry that I wasn’t supposed to touch was enough!

After my purchase, I sat down amidst all of the trendy people eating their breakfast (trendy people who probably knew better than to refuse a cup and ice with their glass bottle o’ orange juice) and tried to play it cool (like the Scientific Chris Martin).

After munching on my satisfactory blueberry muffin and convincing myself that my glass bottle o’ orange juice was fine without a cup and ice (a half-truth, to be sure), I saw an elderly man approach my table. I’m from Texas, so we don’t do the avoid-eye-contact thing. So I smiled, and he asked if he could sit down next to me.

So the man sat down with his tea or coffee (can’t tell which, they’re both brown and smell different than hot chocolate, which is also brown, but definitely superior) and told me that he was an 87 year-old man from Australia. I told him I was from Texas, and he immediately started talking to me about capital punishment.

Is that what we’re known for? I thought John Wayne was Numero Uno*.

*If John Wayne wasn’t from Texas, don’t tell me. I don’t want to know.

Then we talked about prison reform in places like Australia and Norway, and whether Texas was actually successful in stopping repeat criminals with capital punishment. Certainly, dead criminals don’t repeat crimes, but we talked about whether that was the best method. Mainly, he talked, and I listened.

Then this friendly Australian gentleman, who had made my breakfast venture enjoyable, told me to ask my Texas friends to rethink capital punishment, and to tell them all that “I meet a grumpy old bugger from Australia who told me lots of crazy ideas.”

Well this title just gives it all away. Aubrey saved the day by getting my packed lunch for me at breakfast. Without a packed lunch I would have been without a lunch. This would have been bad. There are good things and bad things, and not having a packed lunch is a bad thing, unless you can get a lunch elsewhere, which you can’t do in the hill country of Uffington, making the lack of a lunch a very bad thing indeed.

I meet up with Aubrey and the great archaeology class of Professor McGowen. There I met Jaime, a good man and an even better wizard*. I was also with Erica and Erica again. They came along with the group that went to Christ Church on Monday. I also met Matt, movie-going extraordinaire, Film and Video Studies major, and future Academy Award winner.

My packed lunch consisted of a Mr. Juicy box, a Kit Kat bar, a Walker’s Potato Chip bag, some yogurt, a spoon, a napkin, a white bag in which to store it all, and the sammich—a salmon and chile sandwich.

This sammich tasted like fish and chile in bread. It did has a flavr.

We finally arrived at the place of the Uffington Chalk Horse. 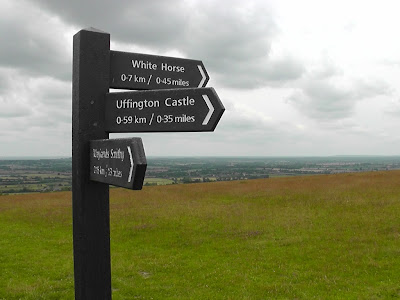 I will advise you to be excited about the White Horse, but not about the castle, because the castle is merely the grassy ruins (grassy, not stony) of an old fort that the Romans once used. It is now the home of sheep and sheep manure. Not very glorious at all.

However, the Uffington Chalkhorse is very glorious. 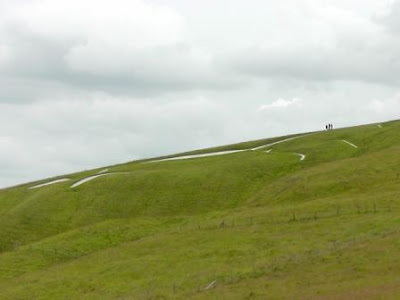 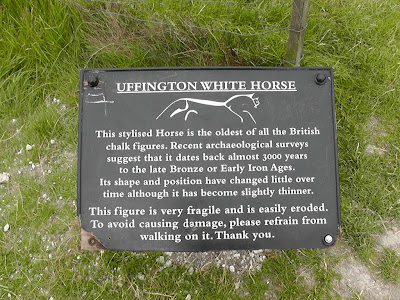 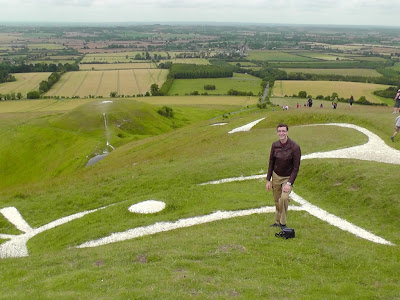 The White Horse has fangs. Rawr. 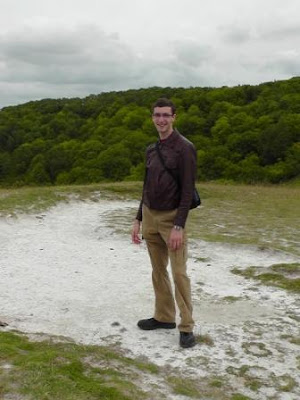 Stay tuned for Oxford Day 4, which may come out today or tomorrow.

The End Just Can’t Get Any More Awesome 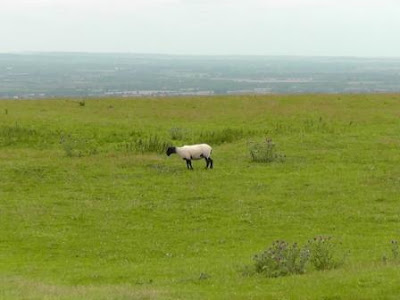