Click for better quality.
Posted by SteventheThorn at 2:15 PM No comments:

LEGO Star Wars: Attack of the Slave I

Celebrating over 9,500 views and 2 years for my LEGO Star Wars stop-animation video, "Attack of the Slave I."
Posted by SteventheThorn at 1:17 AM No comments:

The Protocol of Smilies

Most people use smilies every day without thinking about it. They surround us, penetrate us, and bind our social life together.

I was probably introduced to smilies in the late 90s, when my mother was writing an e-mail and showed me that a colon mark and a closed parentheses make a smiling face.

You had to tilt your head, but the smilie was definitely there. That moment revolutionized my world.

If you wanted to add a dash in between the colon and the closed parentheses, you could make a nose.

And you can make a frowning face.

Introduce an apostrophe or semicolon, and you can make a crying face or a winking face.

:'-(;-)
Over a decade later, the universe of smilies has exploded. To show only a few:

Just like our conscience tells not to steal or cheat, most of us inherently know, at this point in human civilization, how to use smilies. However, it has come to my attention that there is also an unspoken Protocol of Smilies. I am about to make it spoken. In doing so, I will step on some toes, but these rules will help you in the same way that table manners do.

You don't want to talk with your mouth full, do you?

The dash is dead. No more noses in your smilies. Mothers are allowed to use smilies because mothers are sweet, but internet natives should not be using noses. Girls might be able to get away with it, but men will get their Man Cards revoked if they use a nose.

If you have a girlfriend, then you can send her a smilie in your text.

hey beautiful, how are you doing? :)

That's okay. But the following is not allowed:

hey bro, let's hit up the tailgates before we go to the game :)

In bro-to-bro communication, smilies are okay* in chatrooms (does anyone use those any more?), messages, and e-mail, but not in text.

*My friend Will is a staunch believer that bros should never, ever use smilies. This may cause a religious scism.

You know which one I'm talking about.

:P is one of my all-time favorite smilies. However, it is, by far, the most dangerous smilie to use in any communication, bro-to-bro, bf-to-gf, or bff-bff.

The Dangerous P can be anything from a sweet, innocent "jk" to a scathing firebrand of scarcasm.

Ooh. Now that was scarcastic.

Be careful with the Dangerous P...especially in those girlfriend texts, man. In fact, don't text your girlfriend. Girls really like it when you don't contact them*. It means you're mysterious.
*SteventheThorn takes no responsibility for any relationships that may be terminated as a result of following this advice.

This not just a set of arbitrary rules. This is civilization. Absolute values. Right and wrong.
Do you want us to devolve into anarchy?

Remember, it is easier for a camel to use a smilie than for a rich man to enter the kingdom of heaven.
Posted by SteventheThorn at 1:17 PM 3 comments:

I wrote a review of Switchfoot's eighth album, Vice Verses.

I won't spoil the review by telling you that Vice Verses is a phenomenal record worthy of 5 stars.

The article is currently a Blogcritics Editors' Pick. That's exciting.
Posted by SteventheThorn at 1:40 PM No comments:

Good Side Heroes: Gandalf and Eowyn

I'm really happy with the way Gandalf the White turned out. I decided to give him a brown basecoat to help with the white colors. I transitioned from brown to tan to white, and I ended up leaving the brown in as shading.

If I had thought about it, I never would have left brown shading on a white miniature, but for some strange reason, I think it works. 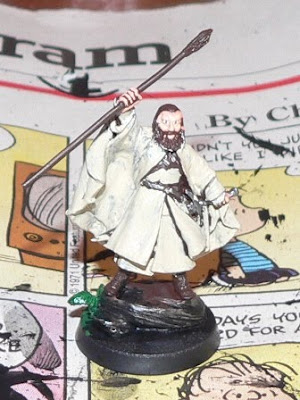 Gandalf looked like Moses while I was painting him. He's parting the Red Sea. 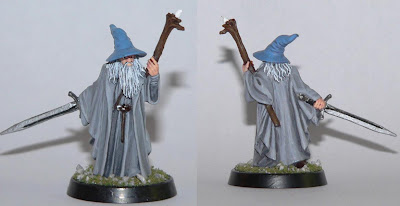 I started painting Gandalf the Grey in 2007, not long after I switched from Testors Enamel paints to Citadel Acrylics, but it took me 2-3 years to force myself to finish painting him. I tried various grays and blues on his cloak and hat before being happy/settling for my own sanity.

I'm not going to tell you where, but this miniature is an example of the Principle of Let-Things-Be, where you try to fix one little bit of paint that's out of line--and in the process you make things worse for a large area of the mini.

So then I had to fix up the big mistake-splotch. But I got it. And now I don't really remember where the mistake was.

'nuff said.
Posted by SteventheThorn at 2:25 PM No comments: