This past weekend I finally read George Orwell's distopian novel 1984. The book transfixed, horrified, and fascinated me. On some occasions, it was so violent that it made me cringe. On other occasions, it was so depressing that I had to put it down, stare out of the window, and contemplate whether there was any possible hope for the human race. 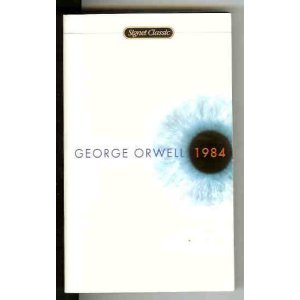 The book is about Winston Smith, a man who lives in a totalitarian country called Oceania. Everything about Winston's life is regulated and watched by Big Brother, the Party. This is a world where the past, the present, and the future is controlled by the government. Those who resist Big Brother in action or thought ("thoughtcrime") will be vaporized - not just dead, but erased from every scrap of history.

The Party demands the loyalty of every member. It is not enough to obey Big Brother, you must love him with all of your heart. If you don't, the Thought Police will find you.

"Whatever the party holds to be truth is truth. It is impossible to see reality except through the eyes if the Party."

1984 is engaging, insightful, profound, and terribly depressing. The world that Orwell warned us about didn't come to pass in 1984 (maybe because of the book...), but it still carries a relevant warning in 2012. This is an adult book that everyone needs to read.

I have to stress the adult part. This is a heavy book. The typical conservative reaction to all entertainment is, "I don't care about how violent it is as long as there's no sex." Well, there's sex in this book. (And violence and torture--which is fine for conservative audiences.)

Aside: as a huge fan of the band Muse, I now understand their album, The Resistance, much better. I knew that there were 1984 references in the song "Resistance," but now that I've read the book, I can see strong connections to "Undisclosed Desires" and "United States of Eurasia." (Eurasia is one of the three countries in the book.) There may be other references to 1984 in the album, and my ear will be tuned for them at the next listen (i.e., right now).

I leave you with a quote from the Party:

“If you want a picture of the future, imagine a boot stamping on a human face – forever.”
Posted by SteventheThorn at 3:13 PM No comments:

Last week I finished reading Guards! Guards! by Terry Pratchett. It's another adult Discworld novel, and it was entertaining from start to finish. 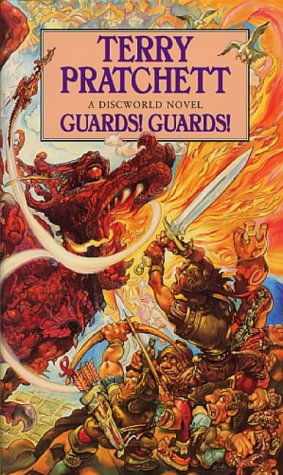 Commander Sam Vimes, newly-minted Constable Carrot, Nobbs, and the rest of the motley Ankh-Morpork City Watch have their hands full when a secret society unleashes a dragon on the city. Things go from bad to worse when the dragon crowns himself king.

Commander Vimes will need the help of dragon-breeder Lady Ramkin, the Watch, and an orangutan to stop the city from being burned to cinders.

A lot of famous Discworld characters are introduced or established in this novel. I'll be reading it again sometime.

Take heart and face your dragon. As Sergeant Colon says:

"The people united can never be ignited!"
Posted by SteventheThorn at 1:04 PM No comments:

I continued my reading list of All-Things-Pratchett by devouring his book Going Postal over the weekend. 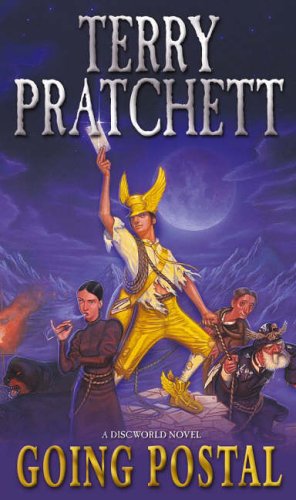 I first found out about this title on an artist's website awhile back. She had some drawings that interested me in the book, even though I hadn't read it yet.

(This artist, Tealin, also has a great collection of drawings about other Pratchett books, Snicket books, and - especially - Harry Potter books. What are you waiting for? Go spend five hours on her website.)

Shall we, then, Go Postal?

Going Postal is about a con-man, Moist von Lipwig, who it at the end of his rope. (Rather, his neck is in a noose at the end of a rope, savvy?) But Mr. Lipwig is given one last chance at life: if he agrees to become the postmaster of the abandoned Postal Service, he can live.

Not a bad deal, right?

The only problem is that his very recent predecessors did not survive long.

Actually, that's not his only problem. There are also:

- Villains running a monopoly in the rival method of communication (the clacks towers)
- Freaky-strange incidents in the Post Office (like strange whispers and the deaths of his predecessors)
- Freaky-strange Post Office employees (one of them loves pins far, far too much)
- Freaky-strange quantum physics that could destroy the universe (or, perhaps, already did, and then recreated it before you could notice)
- A golem who follows him everywhere (that's right, g-o-l-e-m, not Gollum)

There are monsters, bureaucrats, barons, a daring race, a golden suit, and...stamps.

A thoroughly entertaining read.
Posted by SteventheThorn at 10:32 PM No comments:

After reading a review of The Girl Who Circumnavigated Fairyland in a Ship of Her Own Making by Catherynne M. Valente on The Book Smugglers blog, I had to check out the book.

The Book Smugglers rated this book a 10 out of 10, or "One of the best books I have ever read.

With a name like "The Girl Who Circumnavigated Fairyland in a Ship of Her Own Making," and with the main character named September, how could the book NOT be good?

I just finished reading the book this morning. It rates a solid 7 or 8 on my scale. I will probably read it again.

The book is about a girl named September who is taken to Fairyland to have adventures. She meets a Green Wind, a flying Leopard, immigration officials in the closet between worlds, a Wyvern* named A-Through-L**, a herd of wild bicycles (or "velocipedes"), and much more.

Not all is well in Fairyland. In addition to the usual dangers for children-whisked-away-to-Fairyland (like fish pirates and fairy food and dangerous shoes), an evil Marquess rules the land with an iron fist.

September must save Fairyland. But this story isn't like the stories that September has read. The dangers are real. If she fails...she may never get home.

The book isn't the fastest read, partly because I had to stop a few times and admire the beauty of some well-crafted sentences.

Read The Girl Who Circumnavigated Fairyland in a Ship of Her Own Making if you want a book that can be described as charming, delightful, profound, imaginative, and fantastic.

If you don't want any such book, you should still admire the title and the wonderful illustrations.
Posted by SteventheThorn at 10:04 AM No comments:

Midnight, the Amazing Maurice, and the Apocalype

My blog title is not actually a book title. But it's a good blog title, as you shall see.

*"All"? Really? Now that I think of it, I haven't reread The Last Hero...
Shame. And I already went to the library today. Next time then.


I Shall Wear Midnight

I absolutely love the Tiffany Aching series. Tiffany (the young lady seen on the cover) is a witch-in-training who is aided in her adventures by the Nac Mac Feegle (the feisty warriors seen on the cover, ye ken?) 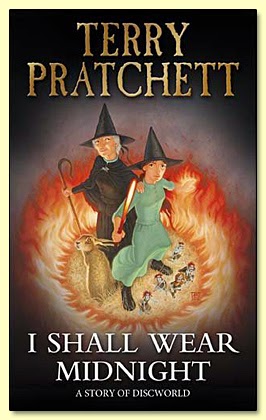 I always have to keep a notepad handy when I read Pratchett, because he has great insights into life and human nature.

In I Shall Wear Midnight, Tiffany must fight the Cunning Man, a former-witchhunter and current evil spirit who spreads lies, hate, and murder (in that order) across history. All of these books are even better than the second time, and this book has one of my favorite characters in the series: Preston. Why Preston? Because he fancies Tiffany.

And it's hi-larious. Enough said.


The Amazing Maurice and His Educated Rodents

I wasn't going to reread* this book, even though it would complete my rereading** of Pratchett***, but then I remembered that I like all Pratchett books better the second time, so I should give this one a try**** because I didn't like it a ton the first time. 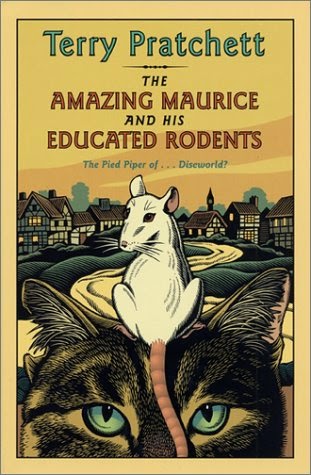 So with all of this rereading behind me, I ventured forth anew in the sea of Pratchett books and read Good Omens. Many friends have recommended this book to me, but it was my friend Alyssa who gave the decisive recommendation--a bit of advice along the lines of:

"Drop whatever you're doing--drop that piece of pizza you're holding in your hand right now--and go read Good Omens."

Considering that I was at Hideaway Pizza at the time, I was unable to immediately follow her advice. Whether that failure to promptly adhere to her wishes will result in calamity is unknown--perhaps we should consult Agnes Nutter*.

Nevertheless, I wanted to read the book, so I asked Alyssa if she had a copy. She said yes, but it was back home in Texas--whereupon** I advised her to drop her piece of pizza*** immediately and fetch Good Omens for me. Alas, she was also unable to immediately act upon my advice. Any portents of what's to come, Agnes?

*The importance of Agnes Nutter will become clear when I explain the book's premise--or, failing a decent explanation of the book's premise, when you actually read the book.
**I think I'm using this word correctly, but just in case I'm not, I'm going to consult the dictionary.
***I myself did not one, but two pieces of pizza that day, but for other reasons than the immediate fetching of Good Omens.

Note Importante: As you may notice, this book is co-authored by Terry Pratchett and Neil Gaiman. You probably noticed. I was just making sure. 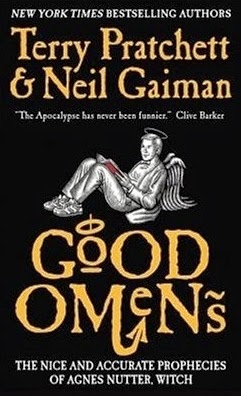 This book will be hilarious, offensive, enlightening, empathetic, irreverent, and/or amusing to people will an understanding of the Bible--particularly the Book of Revelation. Good Omens is about the apocalypse.

Crowley (a demon) and Aziraphale (an angel) find out that the apocalypse is happening in eleven years. How? Because the antichrist has been born into the world. Crowley and Aziraphale have grown quite fond of the world and its lovably-stupid-and-violent-and-charming-and-stupid human population (along with the dolphins--who have very smart brains).

They are rather not fond of the cosmic war that Heaven and Hell are about to stage on the Earth--neither the bloodbath involving billions of people nor the eternity-after are very appealing to them. Apparently, Heaven has no good musicians, restaurants, or social events, and Hell is...well, Hell.

So Crowley and Aziraphale are going to help things a bit by switching the antichrist and getting him to grow up in a healthy-not-demonic-environment. Nurture vs. Nature do your thing.

But then the baby gets switched. Fast forward eleven years, and the Four Horsemen (see: "motorcyclists") of the Apocalypse are ready to get things going. The descendant of Agnes Nutter* (I almost forgot to mention her) is trying to decipher all of these nice** and accurate prophesies to understand the end times. Witchhunters are abroad. A Hellhound is turned into a terrier. Atlantis is rising. Pandemonium, etc. etc.

*Agnes Nutter is a witch who wrote the most accurate prophesies about the end times. Her book is continually referenced throughout the book.
**"Nice" meaning "precise." Not the other kind of "nice."

I was wondering if the book would be entirely irreverent toward the Bible, but after getting to the end, I decided that Pratchett and Gaiman had some wonderful insights on the End Times. Highly unorthodox, but interesting and wonderful nonetheless.

The final pages even include a nice dialogue about God and His Sovereign Plan. It was quite a good scene (with some actually orthodox insights about God's Sovereign Plan).
Posted by SteventheThorn at 4:50 PM No comments: