Tonight I was reading Taylor Guitar's Wood and Steel Magazine, and I came across a touching article about a musician named Alex Woodard and a ground-breaking project called For the Sender.


This project really catches my attention because:
1) I think it's heartfelt, honest, sincere, powerful, moving - everything that art and expression should be.
2) It's brilliant from a community, social-networking perspective; it's art for the 21st century, where you have to develop a relationship with your audience.
3) Jon Foreman is involved. (You know who he is, right?)

I'll briefly summarize the story, but you can download the issue through the Taylor website - and you really should read it. (Also read the author page on the website.)

In 2008, Woodard going through a rough patch in his music career and personal life. He wondered if there might be an "expiration date" on his dreams of making it (something that looks every aspiring and professional artist in the face).

When his most recent CD was about to be released, Woodard promised to record a unique song for everyone who pre-ordered the album. He would write the songs on whatever they wanted it to be on. As a result, he wrote over 100 individual songs.

This experience exposed Woodard to some heartbreaking stories of tragedy, loss, and perseverance - the death of a policeman, father, and husband; suffering and relief after the earthquake in Haiti; the death of a woman's soulmate.

Woodard developed a relationship by mail with some of the people who really appreciated his songs. Then he started writing songs with other musicians based on the stories. He was in the San Diego area at the time, and one of the musicians he began to work with was Jon Foreman: frontman of Switchfoot and personal hero of mine.

Working like this with other musicians, writing songs and letting other people sing them - this was outside of Woodward's musical comfort zone. But it produced huge blessings - both creatively and personally.

This music-in-community gave rise to the book, album, and concert event that is For the Sender.

There's much more to say, but you really must check it out on your own.

Reading this article came at a great time for me.

Every night and morning, I think (or "worry") about my artistic career - and the expiration date. I'm a published author and an aspiring musician looking at a man who's been plying his guitar trade for a while and hit a rough spot. And then, after opening up his heart and singing for other people, found his music and life heading in a different - and more wonderful - direction than he could have imagined.

Additionally, I've been thinking a lot about music-in-community recently: producing great works that you could never do on your own power and creativity; creative important art (with personal and eternal value) with like-minded people.

It's exciting - so exciting that I had to blog about it before I could move on with my life.
Posted by SteventheThorn at 12:15 AM No comments:

Last week Jelani Sims and Darren Jaworski invited me onto their awesome Storyboarder Podcast. On this episode, Jelani and I discuss:

a) How I developed and wrote my novel
2) The writing and creative process
d) Terry Pratchett, the TRON: Legacy soundtrack, Oxford, and other influences


Episode 6 - Storyboarder Podcast
Posted by SteventheThorn at 9:22 AM No comments:

On Terry Pratchett’s Discworld, the gods come into existence when people believe in them. Similarly, Death manifests itself as the Grim Reaper because people believe Death is a skeleton, in a hooded black cloak, with a scythe. 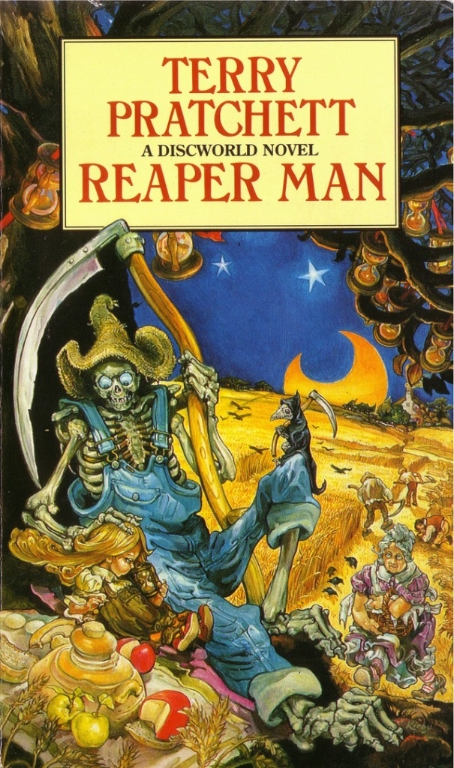 *Do you get the joke? He’s been a faithful employee so they send him off with his hourglass. It’s hilarious.

Soon after, a tall dark stranger appears on a farm in the country. It’s harvest time, he’s looking for work...and he’s good with a scythe.

Meanwhile, chaos runs through the City of Ankh-Morpork. Death (an important public service) is gone, so the dead are queuing up in the increasingly crowded space between this world and the next.
Windle Poons, a 130 year-old wizard from Unseen University, has been waiting to die and reincarnate for a long time. (So has the faculty member waiting to take Windle’s room.) But without Death to escort him to the afterlife, Windle Poons just...comes back.
As a corpse.
“No wonder the undead were traditionally considered to be very angry.”

Windle must adjust to his new (un)life by:
a) Attending a support group for the undead.
2) Enduring the antics of his kind academic colleagues, who help him out by repeatedly trying to kill him
d) Suffer the influx of poltergeist activity and other phenomenon resulting from Death’s absence.

And a sinister power is feeding on this new energy...and growing within the city.

Reaper Man is an entertaining story that fires on all Pratchett cylinders - save one.

Firing cylinders:
a) The premise is hilarious and the execution is brilliant
2) Death’s life as a human provides a humorous and profound angle on the human condition (This is what pain feels like? How do you keep living when you’re just going to die? Are you tricking me into drinking an alcoholic beverage for your personal amusement?)
d) Death is simply one of the best characters on Discworld

While the Windle Poons storyline is humorous (especially with the antics of the Unseen University faculty), the silliness-level goes out of control - á la Hitchhiker’s Guide to the Galaxy – so that at some point you stop knowing or caring what’s going on…except that someone’s rushing about doing something exciting and it’s all very entertaining.

That’s what you call a memorable ending.