I learned QWERTY because my dad made me learn QWERTY. When I was a kid, I hated typing because it was hard. I typed with my index finders.

When I wrote my first e-mail (which was to my dad), mom commented that "it took the boys one million years to write their e-mails because they wouldn't type the way they're supposed to."

My dad taught me to type through a basketball game on the computer. If you typed the words quickly, you scored points. If you didn't type fast enough, you lost the game. I learned to type quickly.

I learned QWERTY.
I learned the home keys: asdfjkl; 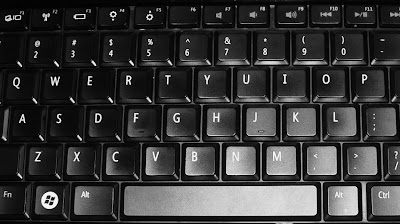 I don't play the piano well. Why not?

My mom has played the piano since she was a kid. Didn't she teach me how to play the piano? She tried.

However, when it came to piano, I just didn't "get it." Maybe it was the boring music that I practiced. Whatever it was, there wasn't enough about the piano to keep my attention.

There wasn't anything about playing the piano that motivated me to practice through the hard parts. Chords and scales couldn't keep my attention. I didn't know why I had to learn them and I couldn't understand my mother's patient explanations. I started playing piano when I was five or six, but I never got good at it.

I started playing the guitar at age fifteen. I still play the guitar. I practice regularly. I listen to and play enough guitar music that I know that it's worth working through the hard parts. No computer basketball players score points when I play "Wake Me Up When September Ends" by Green Day, but I enjoy playing just the same.

I practice the repetitive things that aren't fun so I can play the songs that are fun. I can see the end goal in sight.

In the New Testament, Paul told Christians to look to Heaven as the end goal. He told them to look at Jesus as their example, because Jesus "for the joy set before Him endured the cross, despising the shame, and has sat down at the right hand of the throne of God." (Hebrews 12:2)

Christians are supposed to think of Heaven when life gets really tough. Heaven, not computer basketball players scoring points, is the incentive to keep going.

Sometimes you don't see the end goal, but you're entertained enough to stick at something and get good at it. Sometimes you're not entertained, but you're mature enough to have discipline. You discipline yourself for the purpose of something. You believe the authority figures who are telling you that "it will be worth it in the end."

Someone puts a keyboard in front of you, and your fingers automatically go to asdfjkl;.
Posted by SteventheThorn at 5:01 PM No comments:

Moderation as the Key to Happiness

Prayer and Paul the Octopus

Posted by SteventheThorn at 4:48 PM 2 comments:

Not old enough to be an adult.

The other day*, I told my mom that I was going somewhere. Even though I was 18, she asked me, "Are there going to be any adults there?"

*As I've gathered from my friends, "the other day" can have a very loose interpretation. It can mean anytime from yesterday to seventeen years ago. In this case, it's about two years ago.

Some people are under the impression that 18 year-olds are adults.
Not my mom.

"There's going to be a former Marine (and current statetrooper), an Air Force Academy cadet (and current second lieutenant in the Air Force), a fireman, a 19 year-old in nursing school, and a few other 18 year-olds," I responded.

"But are there going to be any adults?" she repeated.

Some people are under the impression that people over 20 with military experience, and people with emergency medical training are adults, are adults, but apparently not my mom--?
She must be joking.

"Mom, those are all adults," I said, but I knew it was useless. We were clearly working under different definitions.

What does to take to be an adult under her definition? And is she the only adult (or is she an adult?) who thinks that way? 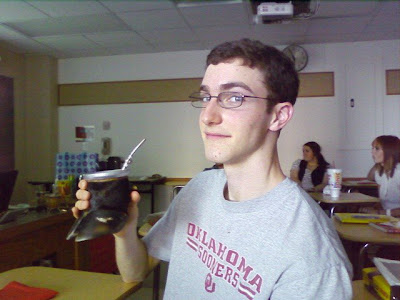 Adults. Maybe you have to drink out of a hoof to be one.

Maybe you're not an adult if you have to ask. Or maybe you're an adult if you're married and you have two kids. Having one kid is probably not enough, but if you have two kids, that probably proves that you have guts and you're an adult. Two of them can team up and tie you up--so if you're tough enough to keep 'em both licked, then you're probably an adult. As an adult, you must be capable of striking fear into the little hearts of your offspring.

But seriously, when are you an adult? When are you finally old enough for adults to stop telling you that you're too young to get married? What's the magical age or rite of passage? Do you need to be financially independent? Do you have to watch the Weather Channel or take naps?

I wouldn't know.
Posted by SteventheThorn at 8:19 PM 2 comments: