The entry for Earth in the Hitchhiker's Guide to the Galaxy (the universe's most complete and exhaustive encyclopedia) reads as follows:

Mostly Harmless is also the title of the fifth (and final) book in Douglas Adams's Hitchhiker's trilogy. 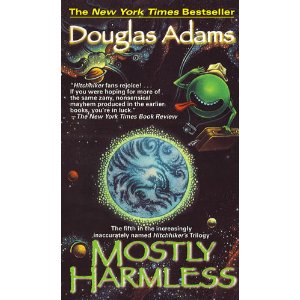 After a series of misadventures, publishing arguments, and sandwiches, Ford Prefect and Arthur Dent find themselves on Earth once again.

Earth is still mostly harmless - although the same cannot be said of the Vogon fleet.

...or of the infinite number of parallel universes and the ensuing consequences when they collide. (Just ask Trillian and Tricia McMillan).

And as long* as there's an Earth, that's the way it will be.