I felt like a funnyman last week while I was reading Making Money by Terry Pratchett. Whenever I went to the chiropractor, I wondered if people thought I was reading a self-help book. 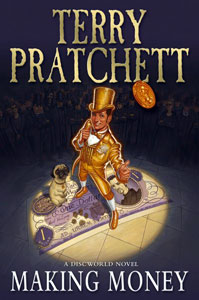 Making Money is the sequel to Going Postal, which features lovable trickster and criminal Moist von Lipwig (sort of a Jack Sparrow figure in that respect...sort of).

There will be MILD SPOILERS if you haven't read Going Postal.

Both books feature the golems, the clay men* which are some of my favorite characters on Discworld.

In Going Postal, Moist von Lipwig is a convicted criminal who is given a choice:

(And you'll have to read my blog post - or better yet, the book itself to understand why that could be a tough choice.)

In Making Money, Moist has successfully got the Postal Service up and running, but now he's bored with life. So he's doing dangerous things like scaling his own Post Office and trying to break in - even though he has the key.

Lord Vetinari, the Patrician (some might say "tyrant") of Ankh-Morpork, knows Moist's true colors and understand that Moist can never be happy in the daily humdrum of a successful business.

So he asks Moist, "Would you like to make some real money?"

And Moist is given the opportunity to turn around the failing Royal Bank of Ankh-Morpork.

Last time, Moist was only making stamps - and people were trying to kill him.

Who knows what to expect now that he's...


It speaks to Terry Pratchett's talent that he can write stories about mail or banking and still make them interesting. I give this tale a 7/10.

And that's 17 books for the summer.
Posted by SteventheThorn at 10:22 AM