a) On this day in history, I had trilingual ice cream.
2) What if I didn't use footnotes in this post? Would the universe collapse in on itself?

Caleb and I started the day with mass at Notre Dame. The pictures speak volumes, but a camera cannot capture the beauty of Notre Dame. 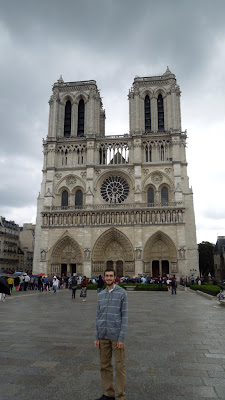 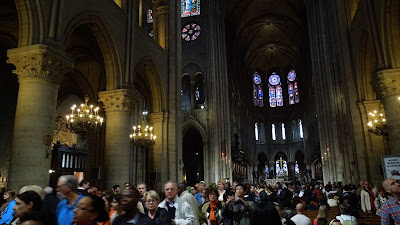 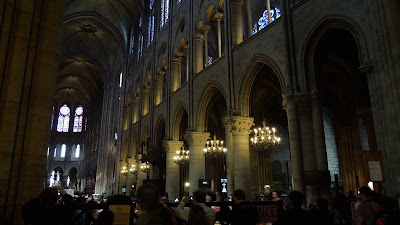 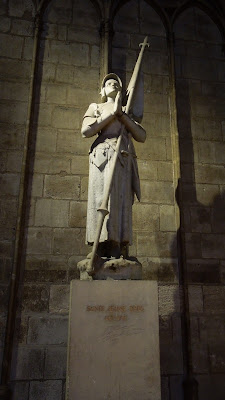 Joan of Arc. A heroine for the ages, and she died at age 19. 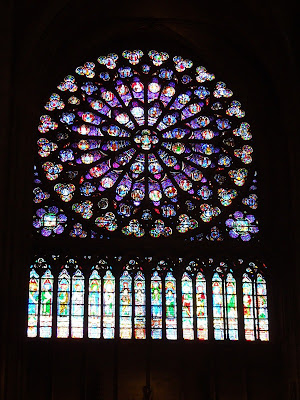 One of the Rose windows. 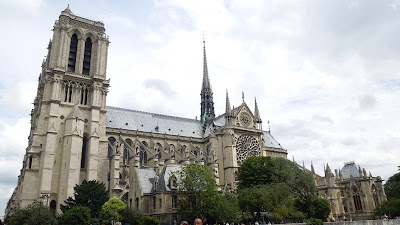 Notre Dame from the outside. 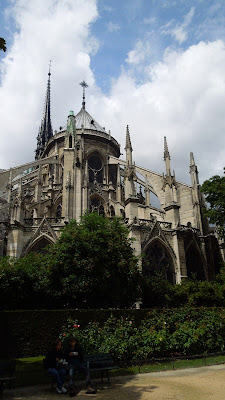 After mass, Caleb and I had lunch at an excellent café just down the street from Notre Dame. I ate Quiche Lorraine (ham and cheese) and a blueberry tart.

The blueberry tart was so delicious that Caleb and I practically gasped. We had to pause for a minute to savor the flavor. Who knew dessert could taste like that? 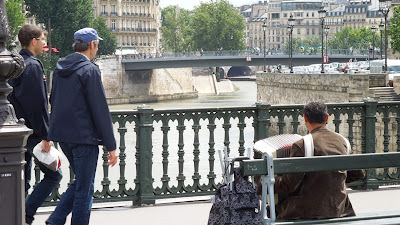 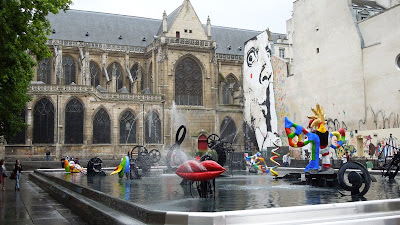 A cathedral next to modern art, just outside the modern art museum. It looks like an anachronon…an anchonism…an anachronimin…

Er, something that’s out of place.

Judging by the lips, it would seem that the Rolling Stones once made an appearance here. 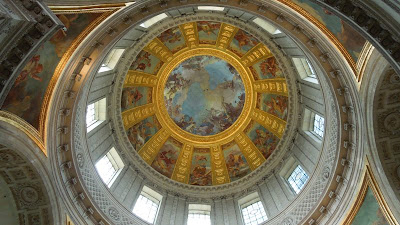 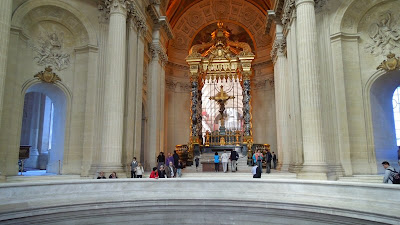 This entire dome is one huge temple to Napoleon. (Oh, and there's Jesus too.) 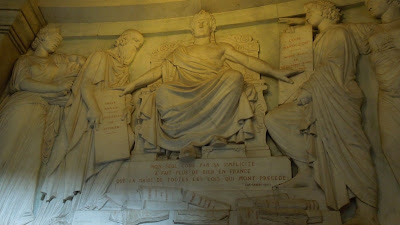 Napoleon, the god, gives his Napoleonic Code and exudes his divine aura. 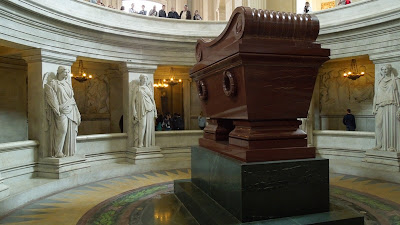 Napoleon's Tomb (rather big for him, but anyway...) is guarded by 12 angels.
Caleb did point out that, from this perspective, if you look up, Jesus is high above Napoleon. 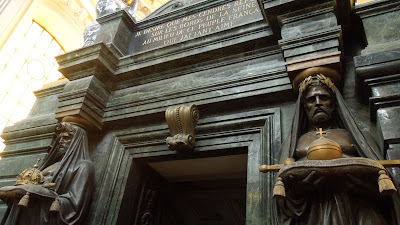 This is at the entrance to the level of Napoleon's Tomb.

(If you speak French and you want to give a more literal translation, feel free.)

The gist that I got was from the inscription was, "I want to be buried by the Seine [and in Paris] so that the people of France can admire me forever." 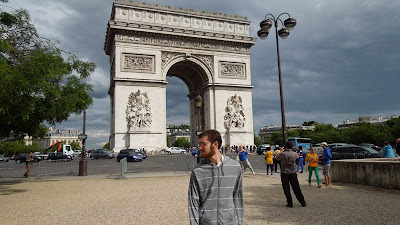 The Arc de Triomphe. I walk toward the camera, looking cool and aloof, while a girl in blue sets off a photobomb behind me. 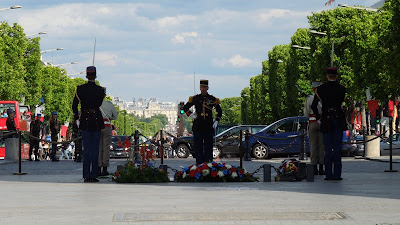 The Tomb of the Unknown Soldier from World War I 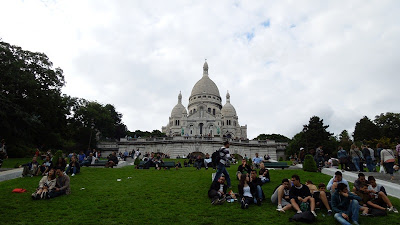 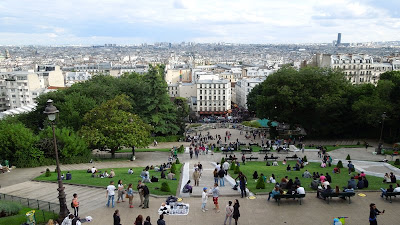 The stunning view of Paris from Sacre Coeur. 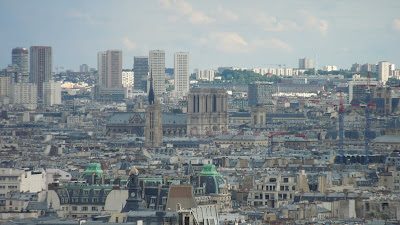 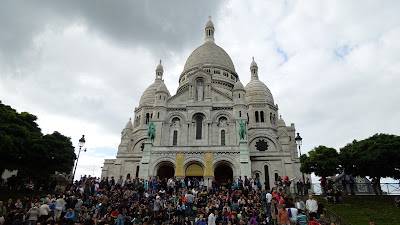 Huge crowds all along the steps up to Sacre Coeur. 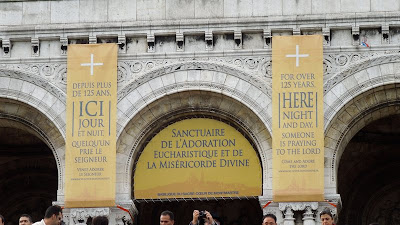 In the afternoon, Caleb got me a banana crepe with sugar before we climbed Sacre Coeur. It was delicious. 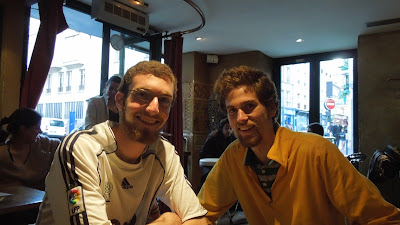 For dinner, Caleb and I joined up with some of his physics friends at Zango’s, a South American food restaurant. I ordered a dish called the “Christophe Colomb,” which had seasoned chicken, seasoned potatoes, a vegetable I have never seen before or since (tasted good…), fried plantains, salad – and as much bread as I wanted. (“Encore, si vous plait?)

A drummer and a classical guitar player (Spanish, perhaps?) were playing during dinner, and they were absolutely phenomenal.

After dinner, we went to a gelato (Italian for “ice cream”) shop, and I had glace (French for “ice cream”) in a kind of sandwich. The ordering process was something like, “Jheh voudreh…er,” as I pointed at the menu. Someone had to explain to me that “glace” was ice cream.

And I can’t remember what flavors I had, because they were so delicious that they left my mind with room for nothing but the New World of Flavor I had encountered.

Time to Climb the Eiffel Tower (Or maybe just use the stairs.) 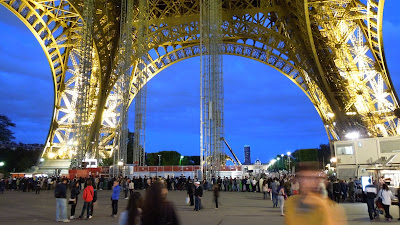 Underneath the Eiffel Tower. It's bigger than I thought it was.

Caleb knows physics, which is how he can move so fast. 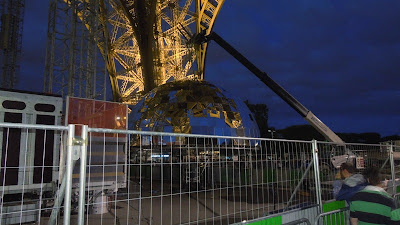 The disco ball from Bastille Day. 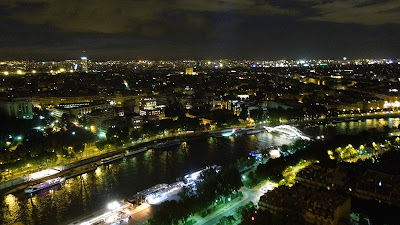 The City of Lights from the second level of the Eiffel Tower. 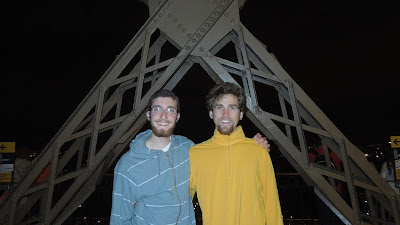 On the second level of the Eiffel Tower.
The first person we asked to take a picture of us was English. I put my camera case down on the floor, and the lady said, “What, is this a line that I’m not supposed to cross? Because I can get a better picture if I move closer.”

And she got a good picture. Look at those handsome guys. 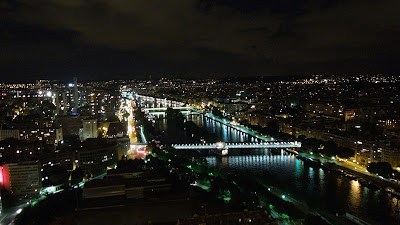 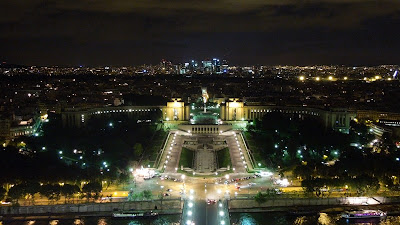 I could have stayed up there hours longer, just looking at the lights. What a beautiful city. 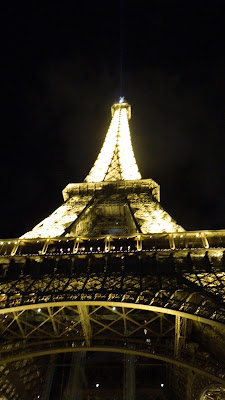 One last look at the Eiffel Tower.
Goodnight, Paris.
Posted by SteventheThorn at 5:13 PM