Day 14: Coldplay at the Louvre and Fireworks at the Eiffel Tower (Bastille Day!)

a) My friend James, who is quite clever, recently suggested that perhaps the “Chunnel” is so named because it is a tunnel that goes under the English Channel. I dinnae ken why I couldnae think o’ that mahself. But then again, James probably has the knowin’ o’ the hiddlins.

2) It has come to my attention recently that I have confused a number of people into thinking that I am still in the United Kingdom or France. This is probably because I didn’t start posting pictures or writing blogs about my trip until I returned from my trip. I’m sorry for the confusion. I’m sure I had a good reason for doing things in this confusing fashion, but I can no longer recall it.

d) In case you missed Caleb’s comment at the end of my last blog post, the identity to that enormous and beautiful cathedral that I mentioned in Part II is called St. Sulpice. 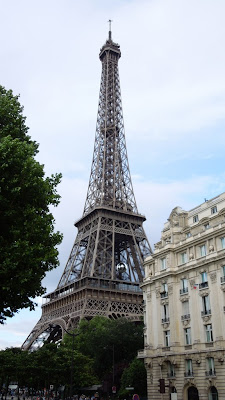 The Eiffel Tower, and yes, that is a disco ball hanging from the tower.


Oxford Strikes Back Day 14:Coldplay at the Louvre and Fireworks at the Eiffel Tower (Bastille Day!)

Part I: “Are Hot Showers Not A Thing?” (and “We Walk Around Paris”)

July 14 is Bastille Day, or French National Day. It is a celebration of the storming of the Bastille fortress in the French Revolution.

It’s like the French 4th of July: lots of parades, food, and fireworks – and most people don’t really remember the historical significance, but they have a good time anyway.

My Bastille Day started with a simple question:

“Hey Caleb, are hot showers not a thing in France?”

But (as Mr. Terry Pratchett would say) the story didn’t really start there...

It started a half hour earlier, when I was standing in the shower down the hall trying to discover new ways to turn the shower faucet without breaking it. I knew that there had to be a way to get hot water out of the thing. After all, the sink in Caleb’s room provided very hot water very quickly.

But the shower would not yield. Then I remembered reading something in my travel book about how Americans might be disappointed to find that hot showers are not a non-negotiable (while lots of vacation time and a 35 hour workweek are).

So I heeded those great Biblical Words of Olde to be “strong and courageous. Or, as Caleb later said, I “Spartan’d” it. (THIS. IS. COLD WATER!)

And afterwards Caleb told me that the shower upstairs had hot water.

We ate delishus French cereal and then we walked around Paris. We more or less wandered in a roundabout meandering fashion to the Louvre, which was fine by me, because all of the streets and buildings were beautiful. If you spend a while walking around the area by Cite Universitaire, or by the Louvre, or by Notre Dame, you get this nagging suspicion that Paris is, perhaps the most beautiful city in the world. 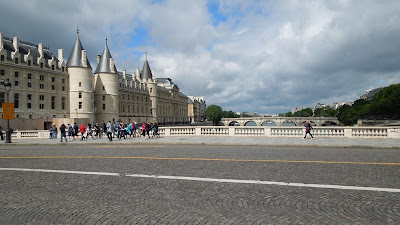 A bridge over the Seine in Paris 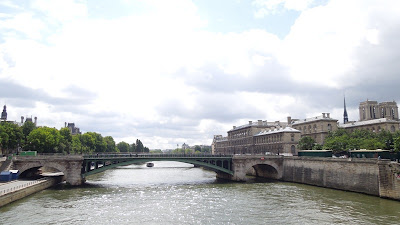 Notre Dame is far off to the right.

My stomach was bothering me (courtesy of that London trip a few days ago), so we went to a Pharmacy, and I found myself wishing that I knew more French so that I could communicate about appropriate matters like medicine and stomach problems. (Caleb was with me, so I wasn’t scared, because he’s quite sensible.)

Thankfully, the pharmacist was one of those nice Parisians that I mentioned before who was very helpful and, thank God, also spoke English.

*And in those two seconds he probably realized I was American.

With medicine purchased, we went to lunch at a little café where I had a ham and cheese sandwich and Caleb had some kinda pasta. And we ordered with a mixture of vocab*, pointing, repeating, and nodding.

*Er...when do you not order with vocab?

Time for the Louvre.

Part II: The Louvre (The museum, not the water closet. That’s called a “loo.”) and Coldplay 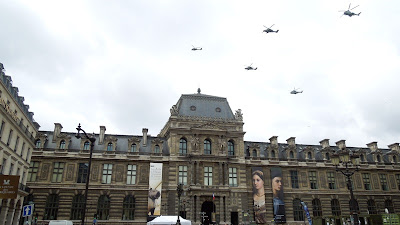 The very end of the Bastille Day parade by the Louvre. That’s the French military flying there. 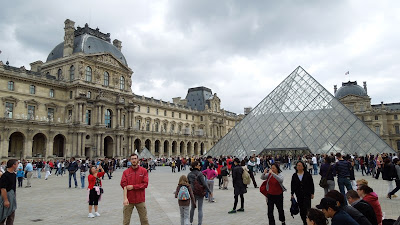 Here I am standing in front of the Louvre. Caleb took two pictures: a candid and a posed shot. The candid is cooler because you can see my forearm muscles and my lips are forming a word that looks like “wha?” 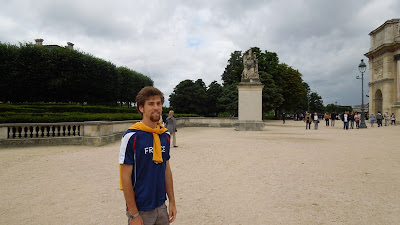 Just standing outside the Louvre is an experience*. You have to navigate your way through the people selling little Eiffel Towers (I don’t know who makes them, but they’re sold everywhere), but we had a nice walk around the grounds before having lunch (so I told the story out of chronological order – big deal) and then we went into the Louvre.

*An experience worth having and worth mentioning. Most incidents in life can be classified as experiences, and many of those are not worth having or mentioning. In fact, some of them can get you in deep trouble if you mention them, especially on the internet. Or so I’m told.**

**At some point, the parentheticals and the footnotes really slow down the narrative, don’t they?***

We enter the Louvre through a second entrance, which went down through a small mall. 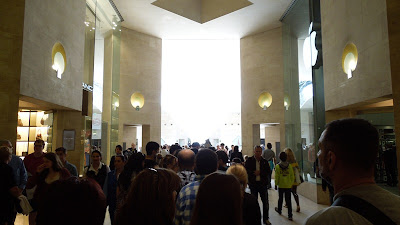 The underground mall by the second entrance to the Louvre 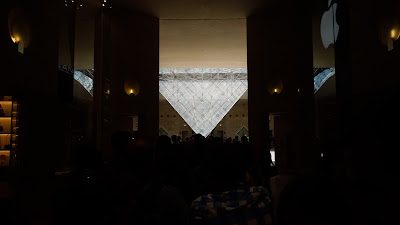 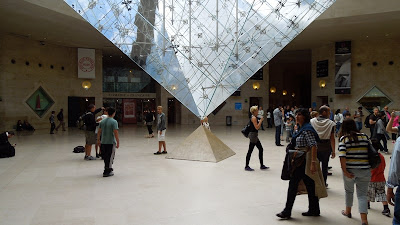 Another picture of the inverted pyramid 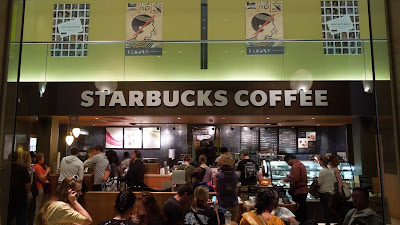 They had Starbucks. (America!) 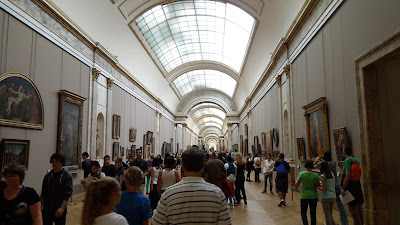 Too much art, too much beauty. Sensory overload. After three hours, I was crying, “Uncle!” and I couldn’t stand to see another painting. 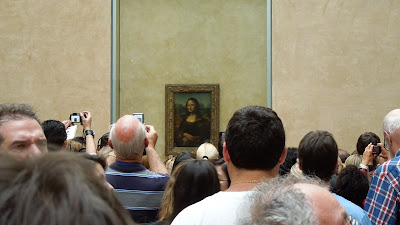 Here’s the Mona Lisa. It’s famous because it’s the first painting ever. 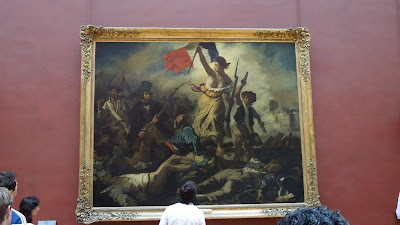 As a Coldplay fan, this was my favorite piece. It’s really cool that the Louvre liked the album Viva la Vida so much that they did a full painting of it and hung it up in their museum. Chris Martin would be flattered, no doubt.

Part III: "Picnic at the Eiffel Tower" (and "The Police Collect All The Wine") 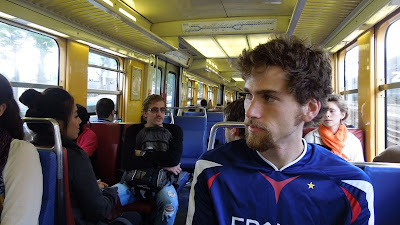 Taking the RER to the Eiffel Tower. 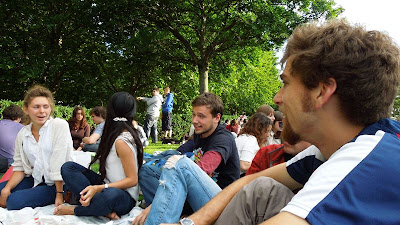 Enjoying great company and eating great food about four hours before the fireworks.

The police started patrolling all along the grounds, stopping by people’s picnic baskets and standing over people. We didn’t know what they were doing until an older Frenchman told me that they were confiscating all of the glass bottles. Apparently, when people get drunk on Bastille Day, they start breaking bottles in the grass and throwing them. The police were trying to pre-empt all of that.

(Some of my Oxford friends who were also there later told me that some police told them they couldn’t have wine at all. Mixed signals were being sent.) 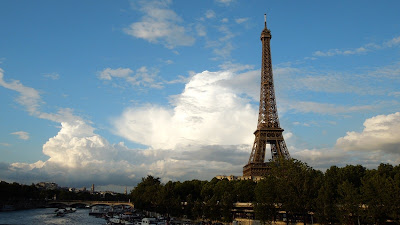 We took a walk after dinner and waded through the crowds. Caleb and I sang my song, “No Dating For Me.” And we admired beautiful, beautiful Paris.

Caleb and I wanted to find a portable water closet, so we started to wade through the thousands of people swirling around the Eiffel Tower and the adjoining streets. And out of the thousands of people there, who should I run into but some of my Oxford friends? We saw Taryn, Hayley, Zach, Nick, and Drew, and they told us about their escapades in getting to Paris, and what they had been doing since they got here. 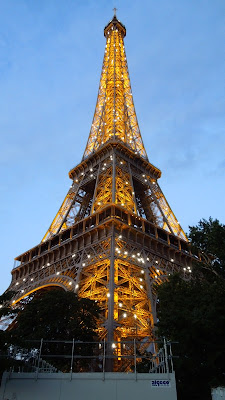 Getting’ the lights on! They were all flashing.

Time to get back to our picnic spot for the fireworks!

Part IV: “The Greatest Fireworks Show on Earth” (and “I Hope You Didn’t Want to Take the Metro Home”)

Unfortunately, we weren’t positioned to see the Eiffel Tower silhouetted against the fireworks, but we still had a great view. 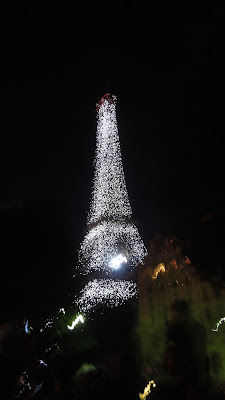 The Eiffel Tower in the City of Lights! 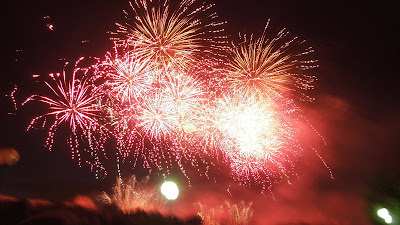 The fireworks! The show went on for about 30 minutes. Best show that I’ve ever seen.

And then after the show, the thousands of people (some drunk, some sober) all queued up and got onto the Metro. Everyone made it home after 30 minutes.

Actually, we walked for about an hour before trying to get onto the Metro, and the bodies inside were packed so tightly that we couldn’t even get two of our number on.

So we walked for another hour.

But we made it home. And we had experienced Bastille Day.

And Caleb, we were 21 in Paris.
Posted by SteventheThorn at 9:20 PM