A Helpful Parisian, a Bored Gargoyle, and a Locked Bridge

On Monday morning, I said goodbye to Caleb and Cite Universitaire. 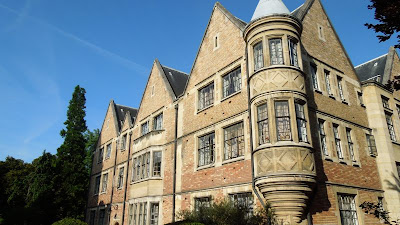 I was going to see some more sights before taking the Eurostar back to London St. Pancras, but I experienced an Unexpected Travel Snag.

I took the metro from Cite to the Notre Dame stop, where I planned to visit St. Chapelle Cathedral. I had plenty of time to see the cathedral and then take the metro onto Paris Gare du Nord – but the metro line from Notre Dame to Gare du Nord was closed.

My first clue was that I wasn’t able to exit at Notre Dame. I had to take a long walkway to a completely different metro exit, which was not at Notre Dame.

After a bit of thumb-chewing and not panicking*, I found my way to the Seine and then along the river to Notre Dame.

*Thanks to the Hitchhiker’s Guide to the Galaxy. It has the words “DON’T PANIC” written on it in big, friendly letters.

Fortunately, I had plenty of time to find a way to get to Gare du Nord Station, but I wanted to make sure I knew where to go before I saw any sights. Have to plan the escape route, you know?

Then he told me there was another metro line across the Seine, right next to Notre Dame.
Merci, monsieur.

With my escape route planned, I wandered around looking for St. Chappelle and found that it had a very long line. So I just walked around Notre Dame and admired it one last time.

Of all my options, not a bad one. 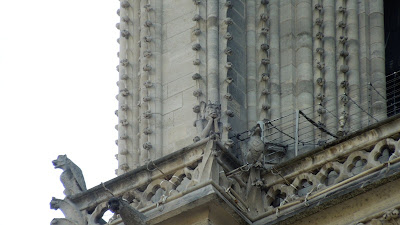 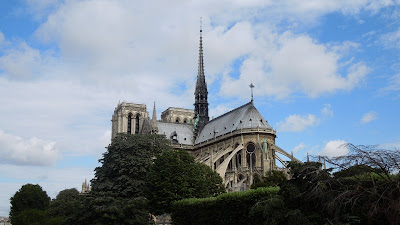 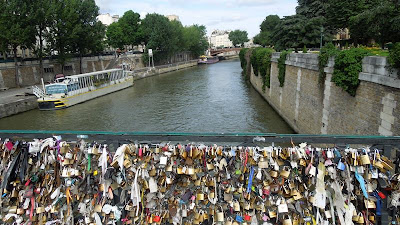 This bridge was close to Notre Dame, and it was, as you can see, covered in locks. Apparently, that’s “a thing to do.” 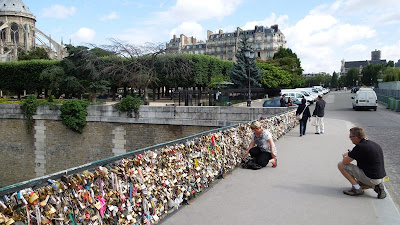 A couple place a lock on the bridge. Anyone want to explain the significance? (I could have just asked, but that would have been too easy.) 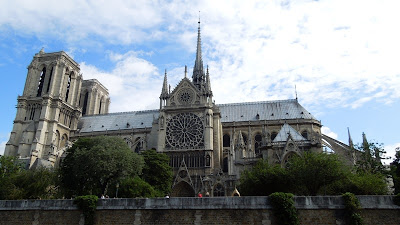 Thank God, getting to Gare du Nord was uneventful. I paid 0.70 EURO* to use the water closet.

*In America, we don’t have to pay for the water closet, or the loo, or the toilet, or the bathroom, or the restroom.

Then I had lots of time to read.

I bought one more French pain au chocolat, and then I waited by my platform. It occurred to me that I hadn’t passed through immigration. And yet I was by the platforms.

Huh. I guess I didn’t need to go through immigration.

I watched the Departures/Arrivals Board to see which platform my train was leaving from. 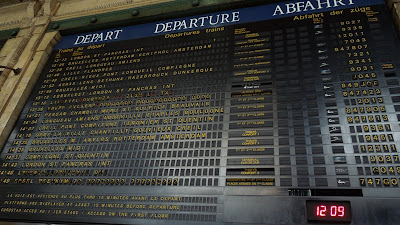 Paris Gare du Nord: the fascinating Departures/Arrivals Board with the flipping letters and numbers.

With an hour to go, the thought occurred to me that perhaps I wasn’t in the right place. This thought was coupled with the revelation (from the board, I think), that my platform was upstairs. And check-in was upstairs.

I guess it wasn’t optional.

An hour later, I had successfully passed through the mandatory immigration without incident and I was sitting happily on the Eurostar, eagerly anticipating my return to Brasenose.

I was back. I swapped Paris stories with my hallmate, John.

Devon and I wore our Real Madrid jerseys at George and Danver’s. 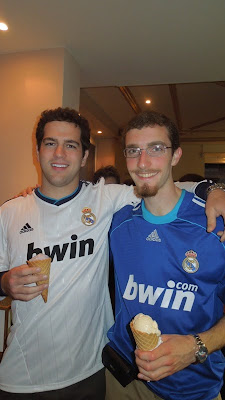 Posted by SteventheThorn at 2:50 PM