I was thrilled this last week when I found a brand new copy of Terry Pratchett's The Last Hero at Half Price Books for $4.99.

This is a very entertaining story (9/10) with brilliant illustrations by Paul Kidby. 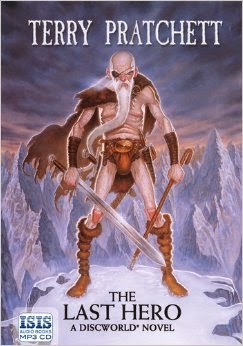 I've read the graphic novel before, but obviously I had to reread it now, didn't I?

Cohen the Barbarian and his Silver Horde are old. They're dying. Mad Hamish is in a wheelchair and his hearing is gone ("Whut?" "I SAID YOUR HEARING IS GONE, MAD HAMISH!")

It's just not right that the gods let men grow old and die.

Cohen the Barbarian is going to return to the gods what the first hero stole.

What did the first hero steal?

Fire. (That may explain what the keg of explosives is for.)

Lord Vetinari and the wizards of Unseen University find out about Cohen's mad plan, so they send a daring rescue mission* over the Edge to save the world. (How can you get to the Mountain of the gods by going over the Edge? Dunno. But it should work...right? After all, the wizards and Leonardo da Quirm** are behind the plan.)

*Unfortunately, the rescue mission will rescue all of Discworld, and not just Ankh-Morpork, but you can't be picky.

**Leonardo da Quirm is the Discworld equivalent of a real life Leonardo who invented things. And painted a lady with a strange smile.

The gods know about Cohen's plan too. But mortals can't hurt them.