Days 9-10: A Flaming Torch and a Classic Bath

For an American, traveling 7 hours is not a big deal. It takes me twice that time to drive to Denver, Colorado, to see my brother and sister-in-law. 7 hours is longer than it takes me to get to San Antonio, but it's not too bad for a drive.

Now, a 7 hour flight could be classified as "substantial." If you add 2 hours and a few quarters to those 7 hours, you can go from Dallas/Fort Worth International Airport to London Heathrow. That’s a substantial flight there, a long 7+ hours.

But you do cross an entire pond, so it’s worth the time.

But this is American thinking.

When I went to Scotland for that weekend trip, taking a 7 hour train ride and travelling (almost) length of Britain in the process, the Scots said I was crazy.


14 total hours of travel for a weekend (round)trip isn’t ideal.

But then again, Oxford is closer to Dundee than Fort Worth is.

Bonus Nacho Uno was entirely unrelated to the point of this post. Bonus Nacho Dos seeks only to clarify this truth.

Oxford Strikes Back Days 9-10:
A Flaming Torch and a Classic Bath

On Monday, we saw the Olympic Torch at Blenheim Palace. I went with Dr. Wright, Sarah, Christian, Linda, and Whitney.

We arrived at about 1pm – although our group was separated when Christian ordered a sandwich*.

*There are some important details to this story, which involve a hungry man, a patient professor, and a bus pulling out of Gloucester Green with some Americans on the top floor wondering if the hungry man and the patient professor are going to "make it". I have omitted those details from the main portion of this blog, relegating them to a footnote with small font. 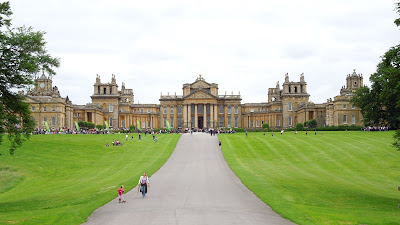 Blenheim Palace, home of the Duke of Marlborough and birthplace of Winston Churchill. 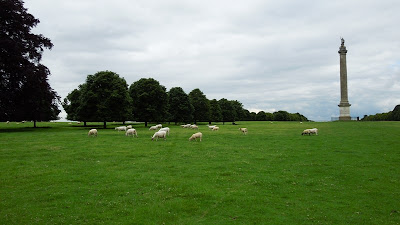 Sheep next to a monument celebrating the first Duke of Marlborough's great victory at Blenheim.

The Torch was scheduled to come to Blenheim sometime after 3pm. We occupied ourselves by:

a) standing on the side of the road
2) playing Egyptian Rat Slap (inside the restaurant inside the palace)
d) taking a walk to the monument commemorating the victory that the first Duke of Marlborough won at Blenheim, which led to Queen Anne rewarding him with Blenheim Palace.

Also, I recited Psalm 23 to some sheep. 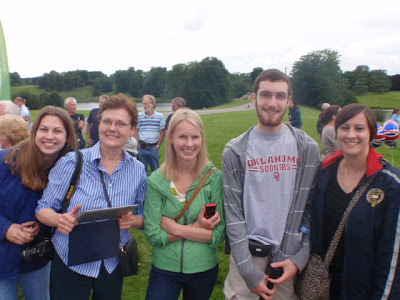 Finally, the Olympic Torch arrived! It was met by much British enthusiasm and a smattering of enthusiastic American enthusiasm. 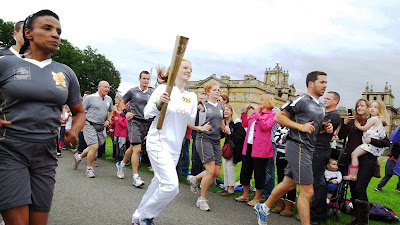 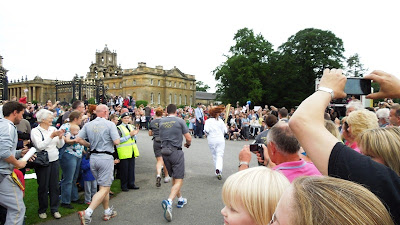 The torchbearer runs the Olympic Torch through the Palace gate.

Then the Duke of Marlborough said some nice things, some people played a song we couldn’t really hear (which is to say that we had the words for it but we couldn’t sing it because we couldn't hear when it started or when it finished).

Then another lady ran the torch out. 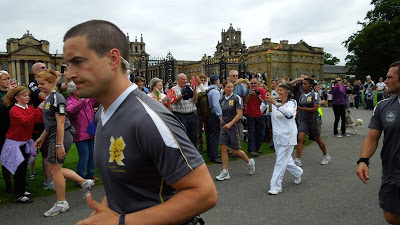 That’s all I have to say about that.

“I Visited My Friend Tom in Bath”

On Tuesday, I Visited My Friend Tom in Bath.

Bath is famous for its Roman Baths.

I learned a valuable lesson on Tuesday: just because a ticket is 10 pounds on nationalrail.co.uk doesn’t mean that it will be 10 pounds when you arrive at the station 20 minutes later to purchase the ticket. In fact, that same ticket might cost 12 pounds more*.

*The specifics of this valuable lesson do, in fact, reveal a lesson learned in reality, and not in the vague space-time of hypothetical thought.

A valid question must be asked at this point, which is, “What kind of stupid person would check the ticket price on nationalrail.co.uk, find a good deal, and not purchase the ticket online?”

A valid answer would be, “The same stupid person who forgot his umbrella when he went to Scotland.”

Next time, buy the ticket online, you silly muppet – and bring your umbrella to Scotland!


At any rate, I bought my ticket at the station – and ended up with a one hour train delay because I missed my connecting train at Didcot Parkway by one minute. By a happy coincidence (like Dumbledore in Harry Potter and the Order of the Phoenix*), I had left Oxford an hour early**. So I ended up arriving at Bath Spa at precisely the correct time.

*Dumbledore didn't leave Oxford an hour early, but he arrived at the Ministry of Magic early.

**A valid question must be asked at this point, which is, "Why didn't you just order the ticket and stick to your original schedule instead of leaving an hour earlier and paying more for a ticket that had an hour delay? Silly muppet."

Somehow, Tom and I made the connection, we met at the rail station, and then he led me on a tour of the city. First we went to see the Roman Baths. 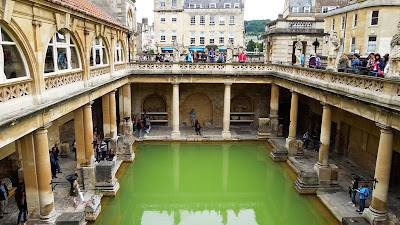 A bath at the Bath Museum in Bath. 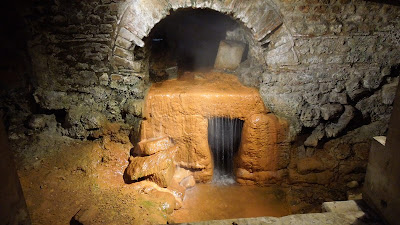 Springs beneath the bath. 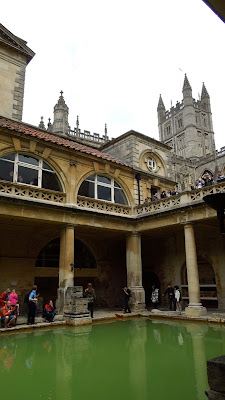 Then Tom took me around Bath to see some of the beautiful Victorian architecture. Bath is a gorgeous city. I was impressed. 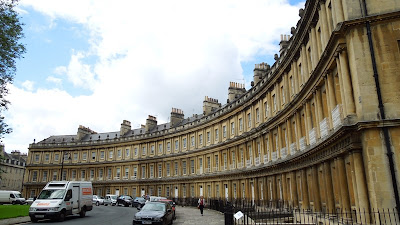 The Circus, a beautiful set of buildings that encircle a traffic circle. 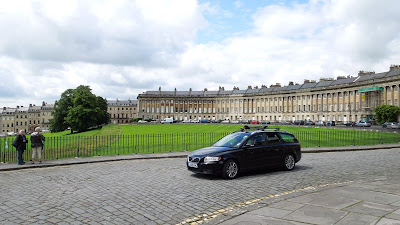 The Royal Crescent in Bath, site of a world record.

We visited the Jane Austen Museum, which is next door to a house that Jane Austen lived in for 6 years. 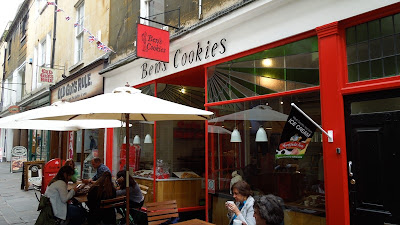 We ended the tour by visiting Bath Abbey. 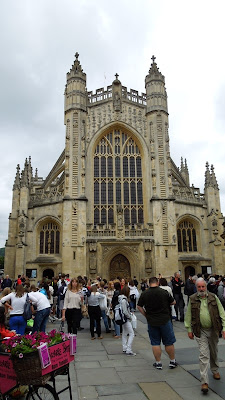 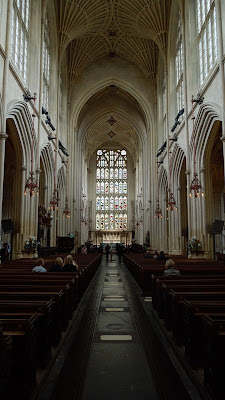 Then Tom bought some delicious fudge and we walked around some of the shops (namely, toy shops and bookshops) before I took the train back to Oxford.

The train back was delayed, but I won’t mention the delay because it wasn’t a big deal, and I ended up on a train with Leah and Melinda at any rate, so we all came back to Oxford together from Didcot Parkway.

I’ll leave you with the best photograph of the day – from the Jane Austen museum! 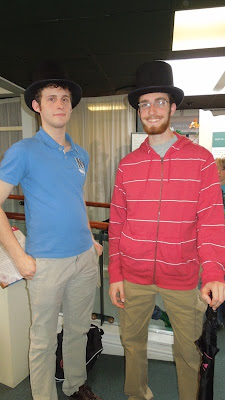 As Tom said, “Suave, so suave it's painful.”