Many of y’all remember that last year I went to Oxford with the OU Honors College and had a phenomenal time that included:

*This was all Shakespeare’s fault, you understand.

3) Dressing up like Harry Potter to visit film locations at Christ Church College and to watch Harry Potter and the Deathly Hallows Part II.

4) Meeting* old friends in London and Nottingham from the Last Alliance Lord of the Rings website.

5) Visiting key J. R. R. Tolkien and C. S. Lewis locations like the Eagle and Child and The Kilns.

7) Making new friends with some absolutely wonderful people and spending three weeks of my life with them in the surpassingly-excellent college that is Brasenose.

With that lengthy but appropriate introduction introduced, I now present a twenty-0ne day blog series entitled:


OXFORD STRIKES BACK*
*Alternate title choices include: The Return of Oxford, Return to Oxford, The Son of Oxford, Oxford Part II, Oxford Part 2, Oxford Returns, Oxford: The Sequel, and Dwayne.

It all started at DFW International Airport in DFW on June 30, 2012. But the story doesn’t really start there. 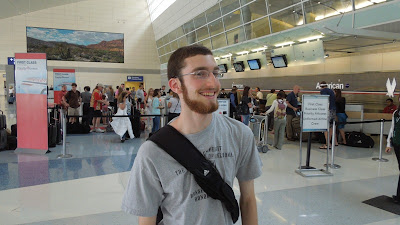 I look amused because it seems like the story starts there but it didn't really start there.

It all started last year, when Dr. Melanie Wright (professor of the Novels class in the Honors at Oxford program) told me (the last week of our June classes before we went to England) that I could go to Oxford again. One student had done the program twice.

That sounded great. But I knew that wouldn’t be me, because it’s expensive to go to England.

But I knew I wouldn’t be able to go back. Because it’s expensive.

Well, I was right about one thing. It is, in fact, expensive.

But with some (read “a lot”) of airline miles and some generous parents, the opportunity to return to Oxford became a realistic option.

And I said "Yes" to that. So it was written, so it was done.

I took a flight from DFW with Dr. Wright and Dr. Velie. On the plane, I finished reading Life, the Universe, and Everything, the third installment of the five book Hitchhiker’s trilogy by Douglas Adams.

I also found myself sitting next to a girl. More specifically, when she found her seat, she found me. But the outcome was the same either way: we were sitting next to each other, so I had to introduce myself*.

*Technically, I didn’t have to, but I did.

I don’t like sitting next to people that I don’t know for 9-10 hours.

It’s awkward when you have to ask them to get up, because then you want to get their attention and you don’t know their name and there’s that weird moment where you’re like:

The person: “Oh, hey, you, person who’s been sitting next to me for seven hours but never bothered to ask my name. What do you want?”

So I avoided the awkwardness of not having been introduced, but I made the introduction as awkward as possible, so I think proper airline protocol was still maintained.

My next move was to figure out how many sitting positions I was going to have.

Position #1 was sitting with both feet on the floor.
Position #2 was crossing my right leg over my left.
Position #3 was stretching out my right leg under the gap in the seat in front of me while my left leg looked on in cramped envy.

(Halfway through the flight, I discovered that with some skillful maneuvering, I could achieve Position #4, in which I crossed my left leg over my right.)

Upon landing, we got in the immigration queue about 8 a.m. Dr. Wright predicted that we would get out at 9:15 a.m. I didn’t want to make a prediction on when we would get out. I was too full of dread to contemplate the longevity of the wait.

However, all of us were pleasantly surprised when we passed through immigration at about 8:45 a.m.

Well done, U.K. Immigration. You have a great system ready for the 2012 London Games.

We met up with another OU Student, Christian, at Stand 14A, where we took our coach to Oxford (“Queen’s Lane, please!”). Christian and I became good auld buddies over the course of the trip.

He showed me metal music and taught me a Tenacious D song (riiiiIIIISE like the Phoenix!). I sang James Blunt songs and got them stuck in his head.

We made good team.

Then we got (back) to gorgeous Brasenose College in Oxford. 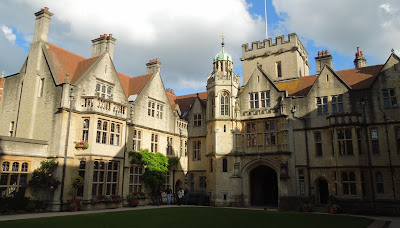 New Quad. I lived in Staircase XIII, the tower left of the gate. 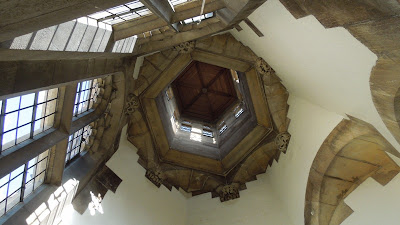 Looking up at the ceiling of the Staircase XIII tower. I lived in a tower. Isn't that cool?

Dr. Wright, Dr. Velie, and I had lunch in the Covered Market at a place called the Pieminister.

I had a Chicken of Aragon pie (meat pie) with mashed potatoes (mash) and gravy (gravy). Then I had a still water (bottled water) to drink. The food was great, the price was good (4 quid 95 p with student ID). I would have had a Ben’s Cookie since I was there in the Covered Market, but I was too sleepy to enjoy cookies. So I slept for four hours (but not in the Covered Market. I slept back at my room).

After dinner, I took some pictures of Brasenose. I also met some of my fellow Sooners.
They were like, "What class are you in?
And I was like, "Well, I was in Shakespeare last year, but this year I'm just...here."
And they were like, "Oh, okay. Cool."

And then we all became best friends. 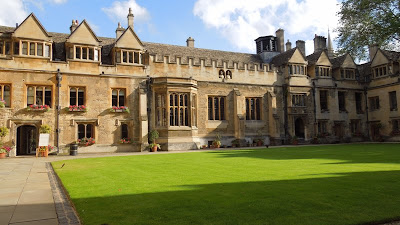 The beautiful Old Quad. Last year there was a temporary kitchen on the lawn, but this year it was nice and open. 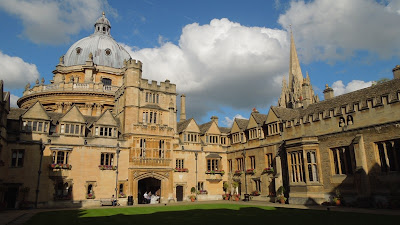 The beautiful Radcliffe Camera and St. Mary's Cathedral over the gate of Old Quad.

We had an excellent dinner in the Old Cloisters. 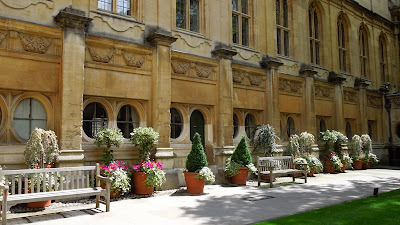 A timely picture of the Old Cloisters

I was giddy with excitement to eat those bread rolls again. For some reason, we had plates for the bread rolls this year, so I wasn’t allowed to spill crumbs all over the table and the floor.

The menu was as follows:

*Jus? I was hoping you wouldn't ask. I have no idea. But it was good. It was Jus So Good.

For dessert we had Apple Latticed Pie with Clotted Cream Ice Cream. 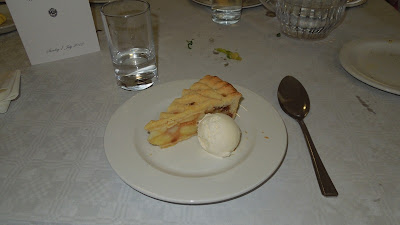 After dinner, I went to the bar to watch the EURO Final. ¡Viva España!

It was a great game. Fabregas played one of the best games I’ve ever seen him play, Xavi and Iniesta shut Pirlo down, and Torres came on as a sub to score the third goal and set up Mata for the fourth. ¡Campeones de Europa, amigo!

After the match, I met a guy named Luke who’s a big Manchester United fan. We talked about football around the world, in the States, and in the English Premier League.

Then I went to sleep.

And that was my wonderful first day back in Oxford.
Posted by SteventheThorn at 3:18 PM