Day 5: The Beatles and London Bridge (Mind the Gap!)

I always knew that the Beatles were a hit band from Liverpool, but I didn’t know that both of their cassettes were such great albums!

Their first cassette, the Beige album, blew me off the curb and down the street the first time I heard it.

But then when I heard their second cassette, The Beatles’ Greatest Hits: The Beige Album Remastered, I was blown further along the street - and I collided with a small girl holding a lollipop, a lorry, and a waste bin. The small girl and the lorry driver were very angry at me – until I explained to them that the Beatles’ Beige album had blown me away.

At which point, the lorry driver said, “Oh, that’s alright then.”

And the little girl said, “You sound like you’re from London!”

That was a very insightful thing for that little girl to say, because this was the day that we went to London.

It was, in fact, the day we were to Mind the Gap.

Oxford Strikes Back Day 5:
The Beatles and the London Bridge (Mind the Gap!)
Stardate: Thursday, July 5, 2012

On Thursday, I went to London with Christian, Hayley, Taryn, Dylan, Lindsay, and Linda. 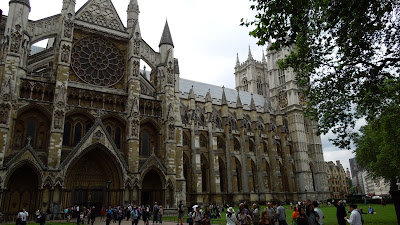 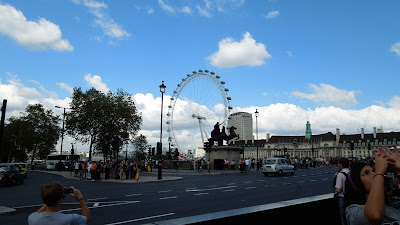 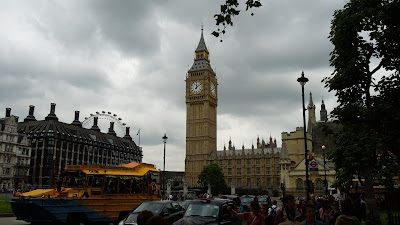 Looking at an unobstructed view of the London Eye, which stares at the surrounding area. 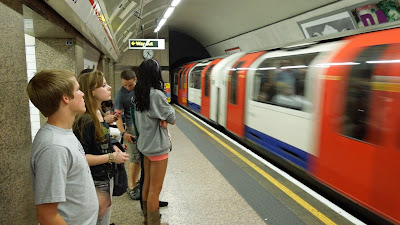 Naturally, since I’ve been to London before and most everyone else had not, I was the unofficial guide for our little group. As a good little guide, I tried to make sure that everyone was together, that we got on and off at the correct stops, etc.

We took the Oxford Tube to Victoria, we took the Underground to Westminster, etc.

Everything was going well. We weren't going to leave a man or woman behind.

So imagine my shock and horror on the Underground when I do leave someone behind.

We were all deep in conversation about something. Linda and I must have been a few steps ahead. Or everyone else must have fallen behind a few steps.

But what’s falling behind a few steps on the Underground?

We’re taking the Northbound to St. Paul’s. Linda and I successfully Mind the Gap and we step onto the Underground. I turn around to see everyone else step on –

And the door closes in front of my face.

I can’t see my face, but I can feel the utter horror.

*Have you noticed that I changed, somewhere back there, from the past tense to the present tense? Instead of correcting this inconsistency, I'm turning it into a humorous footnote. Did it work?

Christian shouts back to confirm, and then Linda and I are whisked away from everyone on the platform. I felt rather stupid.

We got off the Underground, and two tubes later, our group comes off to much joyous shouting and hugs in a joyous and hug-filled reunion.

Now successfully at St. Paul’s, we walk over to the Cathedral. I do my best Chris Martin impression at a painted piano outside of the Cathedral. 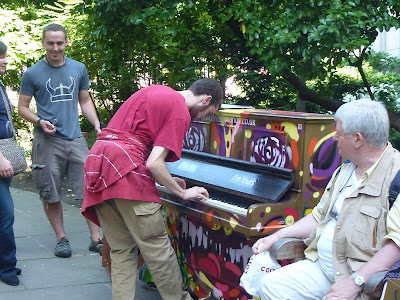 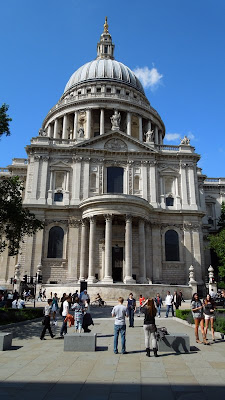 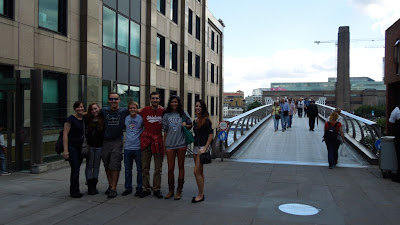 Our highly photogenic group next to the Millennium Bridge. Some Americans may know it as the bridge that the Death Eaters destroyed in Harry Potter and the Half-Blood Prince. 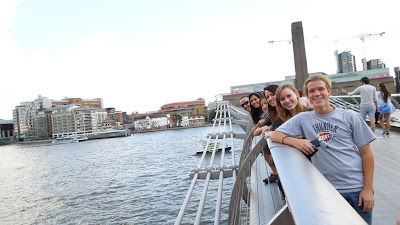 On the Millennium Bridge.
The London Bridge
This is more or less how I heard the story.

While we were on the bridge, Dylan started talking to the group about a bridge. We were looking at the Tower Bridge (commonly mistaken as another bridge).

Dylan: Isn’t there supposed to be a famous bridge around here?

Everyone: Um…? Is there?

Dylan: It’s really important. I think it’s around here. There’s a song about. I think the Beatles wrote it.

Dylan: It might be a bridge from Liverpool. I can’t remember how the song goes. It’s something like, “bridge…crumbling down.”

Dylan: “Falling all around. Liverpool Bridge is…to the ground.”

Dylan: But I can’t remember what it’s called. Maybe it’s -

At this point one of the natives, a Local English Lady standing behind Dylan, offers her opinion.

This story was to be repeated in many forms and varieties for the rest of the trip. Without fail, it completely incapacitated Crystal and Erin with fits of hilarity. Everyone else thought it was funny, but no one quite got the full force of the joke like Crystal and Erin.

Except for Dylan. And John. They understood it entirely. So they kept saying it. Everyday. Even Corbin got in on the action. 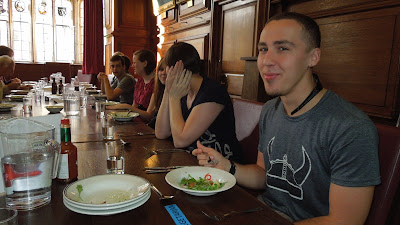 During dinner, I told my friends the story of last year's travel disaster – when I missed my train from Nottingham to Oxford on a Sunday afternoon. That mistake turned a standard 4 hour train ride into a traumatic 12 hour adventure.

You haven’t heard that story? I’ll have to tell it to you sometime.

I’ll include all the funny bits at the best times. Preferably when you’re drinking milk. 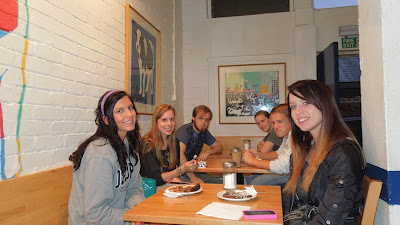 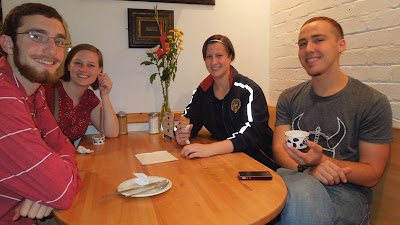 We finished the night with some delishus ice cream at George and Davis. Nom nom nom.
Posted by SteventheThorn at 9:51 PM