While I was in England, I finished reading Grave Mercy, His Fair Assassin by Robin LaFevers. It's the first book in a planned trilogy. 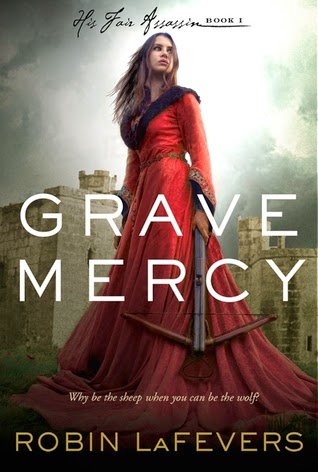 Grave Mercy was Amazon.com's Best of the Month in Young Adult spotlight pick for April 2012.

I was intrigued by book's premise:

It certainly grabs your attention. Not the assassin nuns in particular - mainly the bit about the book being set in Brittany.

Seventeen year-old Ismae is a young girl who becomes a nun at the convent of Saint Mortain, an ancient god of death. She is trained to kill the enemies of the Duchess of Brittany, and anyone else who Mortain marks out for death.

Ismae becomes involved in high stakes political intrigue when the convent sends her to the court of the Duchess of Brittany. France is preparing to invade, and unless the Duchess marries a cruel man with the forces to repel the French, Brittany will fall. The convent suspects that there is a traitor at court with designs to do treacherous things, so Ismae is assigned to watch him (and kill him on the convent's command).

Naturally, the suspected traitor is very gallant and handsome. Ismae, who hates men because of her rough upbringing, naturally finds herself drawn to him.

Will they fall in love? Will the readers be rooting for them to get married? Will Ismae have to assassinate him?

Will the Duchess marry the cruel man who has the power to stop France?

The book was written in the first person, which is not my favorite perspective, but it still made for a good read.

*I have started rating books, as of two lines ago. I don't know why, but I am compelled to use a rating system because other blogs (and Amazon.com) use rating systems. I never use the ratings system on Windows Media Player because the different stars affect my OCD. I just rate everything 5 stars. My Windows Media Player Library is very, very shiny.

I was moderately annoyed by the religious terminology used throughout the book. Ismae signed her letters, "In Mortain, Ismae," and used other such blatantly Christian terms. I am well aware that many religious share many practices, but I thought in this case some of the religious wordage was overdone.

I did, however, like some of the religious commentary, particularly about the gods' ambiguity in letting you know what their will actually is.

And now onto another Terry Pratchett book. (Crivens!)

Today, I finished reading Monstrous Regiment by Terry Pratchett. After my friend James introduced me to the concept of "charity shops" in Scotland ("Goodwill" chain and generic "thrift" stores here in the States), I went a little crazy with buying books. 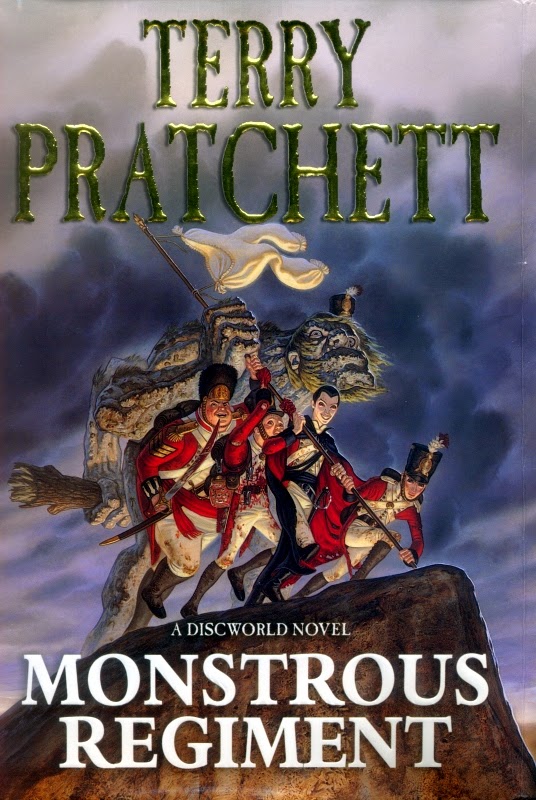 Which is to say that I bought about 11 books. (Maybe exactly 11 books.) 10 of them were Terry Pratchett books, because the UK covers are so good. And also because they were between 50p and 3 quid. I was defenseless in the face of such bargains.

I was also defenseless in the face of having to pay 40 pounds to ship all the books back, but thankfully some friends of mine were able to take the books back to the States in their suitcases.

At any rate, Montrous Regiment is a classic war story - Terry Pratchett style. It was like Bernard Cornwell in Discworld.

The country of Borogravia has successfully ticked off all of its neighbors by centuries of invading everyone - and now the other countries are returning the favor. Polly, a girl, disguises herself as a boy to join the army. The catch is, she's not the only one who had the "sudden, strange fancy" to enlist. She joins the Ins-and-Outs, a regiment with a troll, a vampire, an Igor, and a bunch of other lads who volunteered out of...something. Sheer patriotism?

Or does everyone have something to run away from?

Polly isn't the only one with a secret in this motley crew, but the Monstrous Regiment might be the only troops left fighting for their country.

The stakes are high, Pratchett's wit and wisdom is profound, the religious commentary cuts deep...and those soldiers sure have very, very well-shaven faces.

Another excellent Discworld story. I rate it 8/10.

That's 14 books read this summer...
Posted by SteventheThorn at 3:37 PM