The Obligatory Preface that you can Skip Over If You Must.

The (technically un-)official personal soundtrack to my Oxford Strikes Back* were the James Blunt albums Back to Bedlam and All the Lost Souls.

Back to Bedlam has one of my all-time favorite songs, “High,” which some of you have heard me play and sing many times on the gui-tar. It also has the famous hit single, “You’re Beautiful,” which has a naughty word in the original version.

There are a few other naughty words between the two albums, but the albums are primarily gorgeous songs which didst elevate my soul to most beatific heights.

The (technically un-)official song to my Episode V journey was “Tears and Rain,” from Back to Bedlam.

a) Keep his cell phone off.

d) Realize that he forgot an umbrella.

iii) Chide himself for being so stupid.

In my room at Staircase XIII was a musical chair.

This chair was a xylophone. Every time I sat in it, music played. Sometimes it was one note that went, “Ba-doop.” 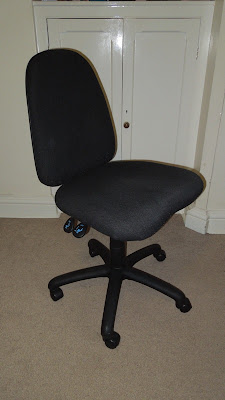 It took me a long time to figure out where the music was coming from. I thought that, perhaps, my laptop was getting into the English spirit by switching the accent of its sounds.

However, just like my cell phone*, I like to keep my computer noise off. So that couldn’t be it.

But on this day, Monday, July 2, as I sat down to my computer and turned on James Blunt’s album All the Lost Souls*, I figured out the source of the music**: my xylophone chair.

*If you had read the Preface, you would have known that this was one of my (un-)official albums of the trip.

**The James Blunt music was coming from my laptop, not my chair. I make an exception for noise to play music on my computer.

This morning started with a shower in an Advanced Shower at the bottom of the stairs (about 4 flights of stairs, I think). Then I had a good Cooked Breakfast of eggs, sausage (or bratwurst?), a banana, strawberry yogurt, orange juice (sadly not Mr. Juicy*), and one of those excellent chocolate croissants that brought me back across the pond a second time.

*The Cooked Breakfasts this time had a noticeable lack of Mr. Juicy, but in his absence other delicious juiceboxes were provided.

It was on Monday that I realized that those chocolate croissants are not really croissants, because they’re not crescent-shaped. I just call them croissants because they’re made of the same floury-flaky-substance. They’re actually called pain au chocolat. That’s French, that is!

After breakfast, I went out on the town (in the rain) with Kristiani and Megan to purchase an umbrella. I felt very, very stupid that I had left my umbrella at home, especially because I talked to my dad about bringing it and it was by my suitcase by my doorway ready to not-be-forgotten.

But then I forgot it anyway.

So I had to go buy a new umbrella. I went to Boswell’s (a magical store like the Weasley’s tent that looks small but keeps on going forever) and bought a small Oxford-decorated umbrella for 7 quid and 50 p.

Now, the purpose of buying an umbrella was to keep myself dry. I already had a hood on my Denver Broncos jacket, so the umbrella was really for the benefit of my not-Denver-Broncos-covered pants.

Unfortunately, while the Oxford-decorated umbrella covered my head and shoulders quite fashionably, it didn’t cover anything else. So after spending a minute in the rain feeling silly (with my pants getting drenched), I sheepishly walked back into Boswell’s and returned the umbrella. The lady was very nice about it.

Then I went to JJB sports to ogle at the football shirts (soccer jerseys), and what do you know? I found a 58” golf umbrella for 2 pounds 99 pence.


I didn’t know if it would fit in my suitcase, but for three weeks, 1 pound a week for a 58” umbrella is a good deal.

But sometimes you have a Duel of Politeness, so BOTH of you raise your umbrellas and end up crashing anyway. (Fortunately, when this happens, eyeballs are not whacked because the umbrellas are so far above your head, see?)

After lunch, a big group of us went to the Covered Market to eat Ben’s Cookies. (Ben didn’t seem to mind.) It am delishus. Nom nom nom.

I did met Ben himself (not Ben Johnson, Ben Morgan, my old tutor) at the meeting for the Shakespeare students. I also let Dr. Velie borrow my pen in the course of the meeting. (Pay attention! This will be important later).

For dinner, we ate a bird (possibly chicken) and had chocolate pie with clotted cream ice cream (nom nom nom). Then we* spent two or three hours in the bar, talking about everything from the pronunciation of “crayon” to the artistically appropriate ways of depicting sex scenes in films.

Dr. Velie was sitting a table away from me. I remembered that he had borrowed my pen and I hadn’t gotten it back yet. So I asked him, “Dr. Velie, do you still have my pen?”

Dr. Velie seemed a little surprised by the question, but he reached into his pocket and pulled out the pen.

“Any other questions?” He put the pen back into his pocket.

I laughed. “Nope. No more questions.”

Then he passed me the pen.

Christian said, “Well that was awkward.”

And I said, “It’s only awkward if you make it awkward.”

I will leave you with a sneak preview of tomorrow: a picture of myself with myumbrella, courtesy of Crystal’s photography skills. 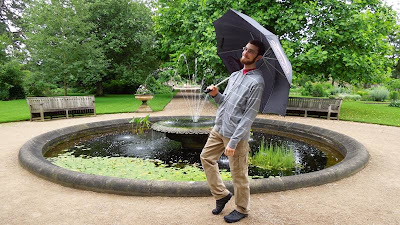 Posted by SteventheThorn at 4:21 PM