Today I finished reading Jingo by Terry Pratchett, the fourth book in the story arc of Samuel Vimes and the Ankh-Morpork City Watch. 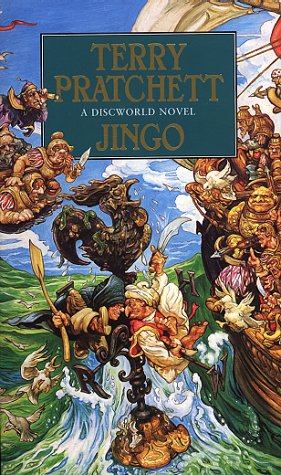 
A previously submerged island rises to the surface in the sea between Ankh-Morpork and Klatch. Tensions, nationalism, prejudice, and war-fever rise with the island as both nations claim it for their own.

The Klatchians might wear funny towels on their heads, but their numbers and weaponry are far superior to Ankh-Morpork's. If Ankh-Morpork is to avert or survive war, it will need Vetinari's cunning, Leonard da Quirm's genius, and the loyal stupidity of Sergeant Colon and Nobby Nobbs.

And what's Vimes to do? He's a copper. He can't arrest an entire army for disturbing the peace...

"It's time to teach Johnny Klatchian a lesson!"
Posted by SteventheThorn at 4:08 PM