This weekend I watched the film version of Terry Pratchett's Going Postal. 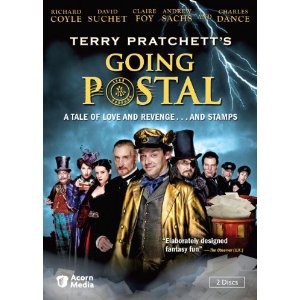 The movie held very close to the book, which I greatly enjoyed reading earlier this year. (It might also interest you to know that the book is ranked among the Top 100 Science Fiction and Fantasy Books.)

Moist von Lipwig is a con man who's come to the end of his rope (which, unfortunately, ends in a noose).

He's given a choice: die or become the new postmaster general.

That sounds like an easy decision - but not when you've seen the mess that the post office is in...and not when you know that the last four postmasters have suffered terrible deaths.

Moist undertakes the task to restore the post office to its former glory. His challenge will include:

Seeing Discworld in a movie for the first time held a similar wonder to seeing Narnia, Middle-earth, and Hogwarts onscreen. The makers of the film did an excellent job with their sets and costumes. They created a very convincing Ankh-Morpork in the film.

One of the best character in Going Postal is Mr. Pump (or "Pump 19"), a golem who serves as Moist's parole officer. I was very pleased with how Mr. Pump and the other golems were represented in the film. Mr. Pump's voice was particularly satisfying. I always cast the voice of André the Giant for Mr. Pump when I read the books. This wasn't André in the movie, but I suppose it was the next best thing.

All of the casting was good. Richard Coyle (Moist von Lipwig) and Claire Foy (Adora Belle Dearheart) were great together, and Charles Dance did a superb job as Lord Vetinari (although I always thought that Vetinari's hair was black...)

Terry Pratchett was deeply involved with the making of the movie, and he was quite pleased with the outcome. I can see why.

Going Postal was well-worth watching, and it would be a good introduction to anyone who has yet to experience to humor and fantastical adventure of Discworld.
Posted by SteventheThorn at 2:08 PM