Unlike what I said in my last Discworld-related post, I did not check out The Fifth Elephant from the library. Instead, I took Thud! (the seventh book in Terry Pratchett's Watch/Vimes series) off my bookshelf and read it. 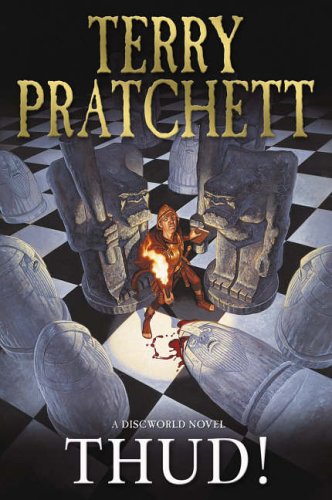 Koom Valley is the legendary battleground where, centuries ago, the dwarves ambushed the trolls. Or the trolls ambushed the dwarves. No one actually remembers.
But every dwarf and troll, whether he was alive at the time or not*, swears that the Other Guy started it.

*And none of them were alive at the time.

Now a dwarf has been murdered in secret tunnels underneath Ankh-Morpork - and a troll club was suspiciously left at the scene of the crime! Commander Sam Vimes has to solve the case before race riots flare up and burn the city down. Unfortunately, with Koom Valley Day just around the corner, every dwarf and troll is already set to pick a fight. Or start an all-out war.

To add onto Commander Vimes's worries, he has to deal with the politics of the Watch's first vampire (part of affirmative action), he must endure the audit of an annoying bureaucrat, and - no matter what's on his schedule - Vimes has to be home at 6:00pm sharp for the most important event on his schedule: reading Where's My Cow? to his little boy.

This book has the Ankh-Morpork City Watch.
It has Sam Vimes.
It's entitled Thud!
How can it go wrong?

Now I have to go back and read The Fifth Elephant...and then read Snuff, the eighth Watch book.
Posted by SteventheThorn at 2:07 PM