a) I went to Paris on Friday the 13th.
2) When I was a kid, I won a Bible Quiz contest as contestant #13.
d) When I was a kid, sometimes I didn’t know that I would become a shockingly attractive man.
iii) Now I know.
C) The ladies in Paris also know.

There is a train that goes from London St.* Pancras International Station to Paris Gare du Nord Station. This train is called the Eurostar. It goes underneath the English Channel, through a tunnel that is called the Chunnel*.

*Have you noticed that I switched the “Saint/St.” thing again? I have.

**Presumably because “Chunnel” is a clever play on words, because it goes “under” the English Channel, and the word “under” starts with “u,” meaning that if you substitute “u” for “a” in “Channel” you get, as it were, a play on words. I could look up the real meaning, but then I’d have to do a Google Search, and my fingers are going to be doing lots of typing as it is.
I should also mention that the train goes from Paris Gare du Nord Station back to London St. Pancras International Station. That would be most unfortunate if it only went one way.


And while I had fortunately left Brasenose for the train station in plenty of time to catch my train, I did not leave with enough time to return to Brasenose, write down my Reference Code, and make it back to the train station in time for my train. (If you got lost somewhere in that convoluted sentence, here's a summary: I was late.)

So over the next 30 minutes, I ran around Oxford with my luggage on my back, wrote down my Reference Code, got sweaty and angry (can’t tell you which got worse), and somehow made it to the train station with the knowledge that I could have made my train after all if I had only shaved three minutes off my time.

Boy howdy. Not ready for the Olympics yet.

So I went through the Typical Travel Panic. I had given myself two full hours between my arrival at St. Pancras and the departure of the Eurostar. But now I wondered if even that cushion would be enough.

So I was going to miss going to Paris and my money would be wasted and I would be disappointed and so would Caleb and my whole weekend and my trip and life itself would be ruined.

But then I took a train that left Oxford 30 minutes later (add 15-20 minutes later-later courtesy of British Rail) and made it to London St. Pancras in plenty of time.

When I went through French Immigration, the man said, “Bonjour” to my “Hello,” and I had to respond with a quickly mumbled, “Bonjour.” Time to Get My French On.

I spent the next two-three hours brushing up on my French (which I had been studying for about a month…ish) and reading up on the Paris Sights and Sites to See.

Caleb had given me a Disaster Back-Up Plan in the event that he wasn’t able to make it to Gare du Nord to pick me up, or in the event that we didn’t make a connection at the station. It was a very sensible Disaster Back-Up Plan that gave me very sensible directions on how to take the metro to Cite Universitaire and where to wait for him to find me.

It was such a sensible plan that I printed it out and memorized it. Then I chewed it into small pieces and swallowed it* so that it wouldn’t fall into the wrong hand.

*Maybe. No one was there to prove that I actually swallowed.

And lemme tell ya, it is a wonderful feeling to step onto foreign soil and immediately see a friendly face. He smiled big, I smiled big, and I could feel mysmile, you know? On my face.

I could feel my smile on my face.

And in my being too.

So Caleb welcomed me to Paris, beautiful, magnificent Paris, and then we bought my 3-Day Metro Pass and took the RER B to Cite Universitaire. 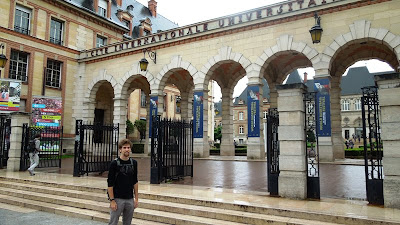 My manly amigo Caleb poses in front of Cite Universitaire.

Then Caleb showed me his dorm and home, which would be my home for the next three days. And onto the sights – and the food!

We walked around the Luxembourg Gardens. 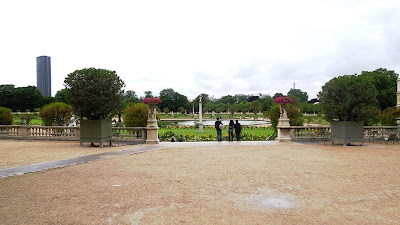 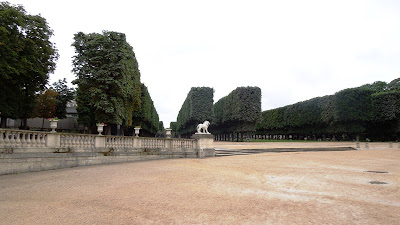 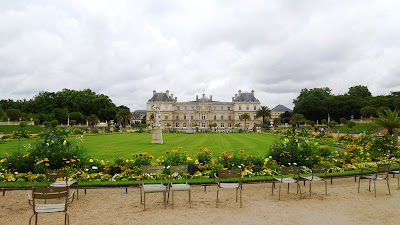 Within a half hour, I was already marveling at the beauty of Paris. We walked into an beautiful cathedral (Caleb, what was it called?) that was so enormous I couldn’t step back far enough to take a picture of it. It was a cathedral in honor of a saint I had never heard of. But boy howdy, it was big.

We walked along the streets, I used my umbrella to keep the rain from getting us too wet, and we finally found our way to Notre Dame (a stirring sight).

We ducked inside a sports store just as the shopkeeper was closing up, and he let us look at some of the soccer jerseys.

Then we had an excellent dinner at a restaurant not far from Notre Dame. I tried out my limited French vocabulary, which consisted of, “Bonjour madame/monsieur,” “Jheh voudreh,” “Merci,” and “I’ll have a water, thanks. Er, merci.”

A Note on Parisian Stereotypes

I've heard the stereotypes about rude Parisians all of my life. And right before I went to Paris, some of my friends had told me to be prepared for straight-up rudeness. On the other hand, my Aunt Sharon told me that the people were friendly.

I didn’t know what to expect. I prayed that God would keep the rude Parisians away from me, and would instead send the nice (and photogenic) Parisians to come my way.

For the entire weekend, I greeted the Parisians with “Bonjour,” said farewell with “Au Revoir,” and otherwise tried my best to use my simple vocabulary.

Every Parisian that I spoke to was friendly and helpful. I had a very pleasant time with the locals. (And they were, on the whole, photogenic. Some of them were very photogenic. Caleb and I were in that last category). So thanks, God, for the nice Parisians who understood my mixture of friendliness, bumbling pronunciation, pointing, smiling, and the occasional deer-in-the-headlights-look.

Part III: Back To The Narrative (and “The City Of Light At Night”)

I didn’t actually tell you what I had for dinner. If you’ve read this far, you probably want to know. I had something like Fettuccine Chicken Alfredo with lots of delicious bread. It was delicious.

Then I forgot my umbrella in the restaurant but remembered it and retrieved it.

Caleb and I walked into Notre Dame, which was very dark and had a huge projector screen showing a movie on the architecture of Notre Dame. There were some little kiosks that looked like those little kiosks where you put in your coin and it gets printed in a significant design that’s relevant to the place that the little kiosk is in.

Caleb and I walked around in the darkness, and it was nice, but I looked forward to seeing Notre Dame in the light, without a film showing.

Then we went to the Shakespeare and Company bookstore. 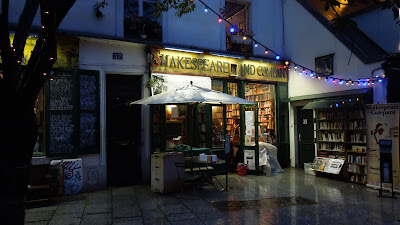 Then Caleb’s friend Kierstin joined us, and we went to get some chocolate crepes (after a detour in a chocolate sweets shop). The man at the crepe stand, for some reason, identified us as Americans (even though we had ordered our crepes in French. Huh.) and asked us where in America we were from.

He knew where Texas was (yeehaw), and we told him Oklahoma was just north. He was nice to us, and he was particularly nice and gentlemanly to Kierstin. 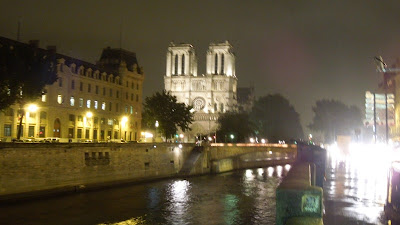 The crepe was absolutely delicious, and we ate it whilst bathed in streetlight as we looked at Notre Dame and admired the beauty of the City of Light at night. Then we walked along the Seine for a bit, and finally headed back to Cite Universitaire.

*Largely because someone else hadn’t forgotten it, potentially because they had forgotten it before and not forgotten it. Either way, it’s a lesson I won’t forget.
But I was in Paris. Paris. And tomorrow was Bastille Day.