A Fellow at Oxford (but not an Oxford Fellow)

I'm at Brasenose College in Oxford. I wrote a long blog post when I first arrived, but then the internet croaked and lost all of my writings. With that in mind, I will now switch to writing in Microsoft Word.

I’ll tell the story from the beginning so you can get a blow-by-blow account of my trip. I’m here studying Shakespeare with the Honors at Oxford program from the University of Oklahoma.

I left DFW on Saturday with two of my classmates, Aubrey and Meghan. We were all on the same flight but we were sitting in different places. There were a lot of people on the plane, a 777. As we flew out of DFW, it was already nighttime, but I enjoyed watching the lights sprawled across the land below me as they got smaller and smaller. There were large dark spots in the middle of the webs of light, and some of the spots were probably bodies of water, but I don’t know if there’s that much water to account for all of the dark spots.

I was worried about not having finished my Shakespeare paper—because I’m stupid (stupid because I was worrying, I had until Wednesday at 3p.m. to finish the paper) but I knew that I needed to sleep. It’s about a 9 hour flight, and I was keeping in mind the dramatic timezone change.
I was, however, still very hungry because I had a late breakfast and a late lunch…and didn’t spend any money on dinner at the airport because the McDonald’s there didn’t have McChicken sandwiches and McDonald’s is no good without McChicken sandwiches. Fact.

I thought about going directly to sleep, but announcements were coming in, so I started watching Jane Eyre while I waited, hopefully, for the dinner that we were supposed to get. The Jane Eyre movie I saw was the most recent release, from 2010, but I don’t recommend it if you haven’t read the book. They jump around a lot, and while the acting is good, the story is hard to follow because of flashbacks. It was fine for me, because I know the story very well, but I imagine that first-time viewers would be confused. Unfortunately, the Bose headphones that my dad lent me stopped working halfway through the movie, so I couldn’t finish it. I figured it was a good time to go to sleep, so I put my eye shades on and tried, unsuccessfully, to get comfortable.
“Sleep” was a matter of waking up every five minutes to adjust my eye shades and my legs and try not to bother the guy next to me. Apparently I got enough sleep though, because the time went by quickly, and I opened my window shade to be blinded by sunlight sometime around 11a.m. London time (that’s about 5a.m. CST). So that would mean that it’s now…

I devoured everything on the breakfast tray except the tray, the napkins, and the utensils (and the butter, which I didn’t notice until after I had finished my bread and my jam). Then I filled out the customs sheet that my brother told me I would have to fill out, but no one else told me I would have to fill out, but that I would have known about if I had read all of one of the Oxford information sheets that I was (sort of—basically) supposed to read. I had a pen. And asked questions.
Then we flew over Bristol, and I thought about Hagrid flying that “little tyke” over Bristol. The tyke fell asleep. I was awake.
We got into London and I was excited to see Wembley Stadium. I tried to find Craven Cottage, Stamford Bridge, and the Emirates Stadium, but no luck. Wembley is big. Too bad Man United didn’t beat Barcelona.

When we landed in London, the Texan pilot welcomed us to England, and Aubrey, Meghan, and I congregated inside the airport to walk the miles of corridors before finally arriving at customs. Customs took over 30 minutes to get through. The customs officials are intimidating people, but they do their job well. We got into the U.K. Cheerio, wot wot, hip-hip-hurray.

I was disappointed not to see David Beckham outside—just kidding, I was too busy trying to catch up with Aubrey and Meghan while carrying around my heavy two bags (one of them almost exclusively full of chiropractic equipment for my bad back) and trying to find the bus to Oxford. We held up the line to buy tickets well, trying to figure out the electronic kiosk-ticket-machine-thing. I had real English monies, thanks to me mum, so I put the monies into the little machine and tried to figure out the difference between a “return” and an “open return” ticket (I was told to get a “return” ticket, because that means “roundtrip,” so I didn’t know if “open return” was the same. Turns out it is. Basically. Eh??)

Then I was worried because Meghan had to get into another line because her card wouldn’t swipe, but Aubrey and I had already bought tickets for a bus that left in 20 minutes. I thought either we would miss the bus, or Meghan would have to get a different bus, or we would all miss the bus. The way to the bus terminal was a long way, so I was afraid the actual bus was far away.
It wasn’t. We walked outside to Stand 14a, the nice bus driver took my bags (“Bring it here—there’s a good lad.”) and we got onto the bus. Meghan joined us before we headed out. I looked at the Manchester United advertisement for something and told myself that we were in London. Sweet. Now we can get moving…and I just realized that I was hungry.

We rode the M4 or some other, and I decided to take a nap. So I did. I woke up just outside of Oxford, in time to see the “Welcome to Oxford” sign. We passed a McDonald’s that was wooden and thatched-roof-something-or-another. It looked classy. But I’ll bet it didn’t have the McChicken sandwich (or did it?? A spoiler for later??)

We rode past a few parks, and a few lads having a kickabout in the park, and lots and lots of people in the park, and then we got into Oxford. It’s a big city. A lot bigger than I expected. I knew that Oxford has 36-something colleges in the University (each college is independent but part of the university…it’s not like “Gaylord College” or “Arts and Sciences” at OU or anything like that) but I didn’t know the city was so big.

Our nice bus driver didn’t make fun of me for having two big suitcases, which was nice, and he asked if we knew where we were going once we arrived at the famous Queen’s Lane*, which was even nicer. We said, “No.” so he pointed us in the general direction of Brasenose College.
*Queen’s Lane was the stop that we had memorized months ago as the place for us to tell the bus driver…so it was famous for us. It was our stop. “Don’t miss it.”

We started walking on the sidewalk toward Brasenose, dragging our suitcases, listening to the chatter of English, French, and everything else from the locals and worldwide tourists swarming the streets. I think the English might have traffic laws, but if they do, I haven’t figured them out yet. It was organized chaos, not like the legendary Italy and Mexico that I’ve heard…legends, about, but still a bit chaotic for an American.

We definitely looked American, by the way.

But once we arrived in Radcliffe Square, which is just outside of Brasenose College, we started grinning from ear-to-ear and exclamations of “Wow” and “Wow” were uttered repeatedly. We were in Oxford—and this is where we’re living. “oh hai! yessir, I am studying here, this is a-my college for the next three weeks.” 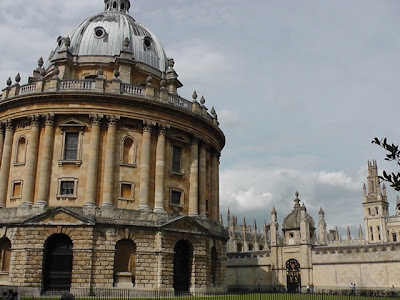 This is Radcliffe Square, and that domed building is the Camera.

Then we were met by some Brasenose students who gave us our keys and told us where to go. A student took me up to my room, one of the nice ones on Staircase V (from Couch 5 to Staircase 5…score!) and then I spent the next hour or so unpacking and getting used to my surroundings.
Dinner was at 6:45pm, and I was very hungry and eager for it to come. 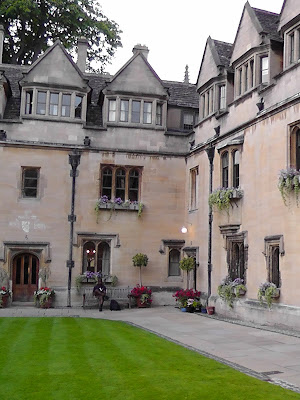 This is Old Quad.

I walked around the college a bit, found Dr. Wright, one of our professors from OU who planned the trip, and she pointed me to the College Chapel. I went in there for a good while.
Then I might have done something else interesting, but probably not, and soon it was time for dinner.

All of the OU students sat at one end of the hall, on a long series of connected tables. The tables were set for a nice meal, so they of course had lots of forks and knives and bread (but no plate for the bread, just the bread on the table…crumbs went everywhere because it was delicious bread). I sat with my friends from my OU Shakespeare class, along with some friends that I had made while standing in line for dinner. One of the girls had lost her luggage, so she had to go shopping for clothes. My friend and former suitemate from Couch 5, Will, wasn’t in yet because his flight had problems in Chicago.

The dinner was excellent. Three courses. One of my friends has taken pictures of all the meals, and I’m going to ask her for some of the photos, because at the moment I can’t remember what it was that we ate for the courses. Rotten luck.
But it was delicious, because the Brasenose cooking staff is amazing! And the people serving the food are amazing as well. Brasenose College is a first-rate establishment, even if some of their fine cuisine isn’t always appreciated by American palates.

After all of us photogenic Americans had finished our dinner, we went to a local pub called the Turf Tavern, one of the oldest pubs in Oxford. A building has been on that site since 900 A.D.
C.S. Lewis has been there (as he was very fond of pints), but I didn’t stay too long as I’m not a drinker. I think some of the locals were a bit bemused to see a huge group of (probably-obviously) American youngsters bursting in onto their pub scene, so some of us just left.
Then we wandered around Oxford and some girls took pictures of doorways. I looked at the doorways but took no pictures. I also looked at the colleges, their walls, and all of their castle-esqueness. Each college is like its own little fortress, and nothing is labeled. Nothing except the street names. And the cafes. And the pubs.

So actually, it’s just the colleges that aren’t labeled. And they are definitely NOT labeled.

Then I came back home to Brasenose College and wrote a long blog post and it got erased. So I went to sleep.
And now I wrote my blog post about Saturday and Sunday. Someday I’ll catch up to Thursday, which is today, but I won’t catch up today.
Posted by SteventheThorn at 10:56 AM